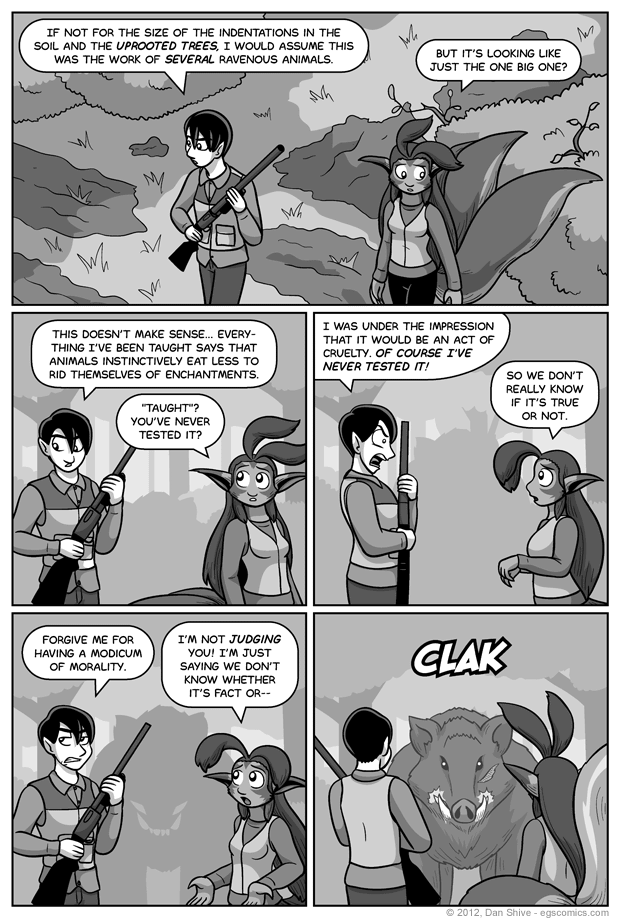 - Stylish scar
- Yet another link to the "not eating" explanation! YAY!

WHY IS THIS NOT A FRIDAY COMIC?! Well, I guess it basically counts as one thanks to last minute re-writing...

Anyway, I'd like to thank everyone who responded to Monday's comic commentary with thoughts and opinions regarding how Raven was holding the gun. Not everyone is in total agreement on whether it was the smart move on Raven's part to be holding the gun that way, but the majority consensus among people with experience seemed to be that it was at least a valid and realistic choice even if they themselves would have done something different.

This is one of the great things about making the comic. I love being able to ask questions and learn things like this. Not only is it fun, but it helps me make better informed decisions. Again, many thanks for all the feedback.

Of course, now that Raven's witnessed this evidence of odd boar behavior, he's changed how he's holding the gun in my best attempt to draw the "ready" carry, so it's an all new opportunity to pass judgement! I'd just like to note that his hand is NOT on the trigger and he's not pointing the muzzle at Grace, so I'm assuming I'm doing something right.

SIDE NOTE! Prior to being informed otherwise by spellcheck, I thought that "modicum" had an "r" in it and was "modicrum". Not sure why I thought that, but I did.