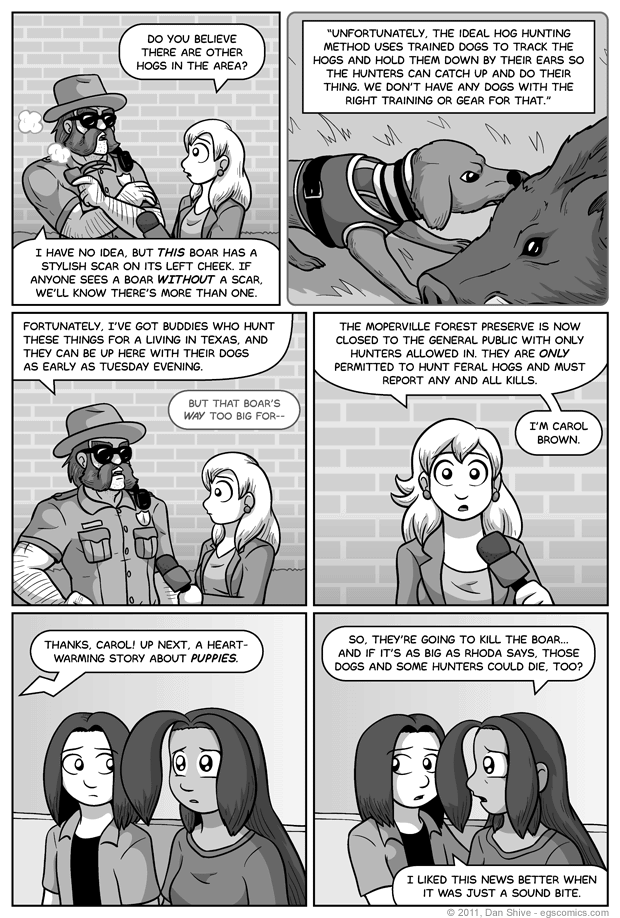 HA! I bet you thought I gave the boar a stylish scar just to be stylish, didn't you? Although I suppose I could've given it a less stylish scar. Maybe a nose scar? Those are significantly less stylish than having one around the eyes. Well, whatever. At least he doesn't have one of those trendy vertical over-the-eye scars.

The trained dogs, the methodology, and the armor shown / mentioned in panel two of this comic is, once again, based in reality. I should note that finding consistent references for the armor was a bit tricky, so that might not be entirely accurate, but the vital areas protected are.

Park Ranger Simpson's statement that it's the ideal hunting method is, of course, an opinion, but the use of dogs seems to be fairly widespread. Whether or not it's cool to send a group of dogs up against hogs is an ethical quandary in and of itself, but the handlers I've seen in the course of my research have all shown a great deal of love and respect for them, and the dogs certainly get the job done.

Their assistance does seem logical, but it's difficult for me to wrap my head around it on an emotional level. Maybe it's because I've never owned a dog and have never hunted, but I just think about putting my cat in danger hunting something bigger than it and thinking there wouldn't be body armor sturdy enough. My cat being, well, a cat, that's probably true.

In any case, I don't think I'll ever look at those pig ears for dogs they sell in pet shops the same way again.