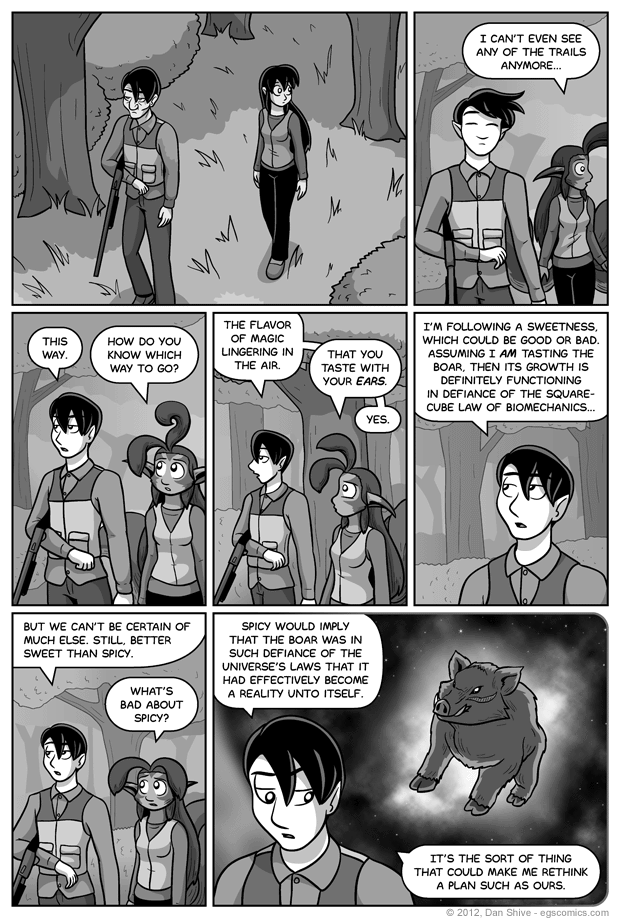 - "My pointed ears can taste your power."
- "I will be bringing a gun."
- Illusory disguises

Raven is carrying the gun based on advice regarding gun safety when carrying guns around on a skeet shooting range. The primary safety guideline was to be in control of the muzzle and know where it's aiming at all times, which makes sense to me. Always treat the gun as though it's loaded and ready to shoot, and never point it at anything you don't want to destroy.

What I find interesting is that in the shotgun owner's manual I downloaded from an online store, there is a long series of solid safety guidelines, but the picture next to the "be careful where you're pointing the darn thing" guideline is someone with the gun resting on their shoulder with the muzzle pointed upward and away from the guy holding it. I guess there's little chance of him hitting something at that angle, but he can't see whatever it might be pointed at and bullets fired upward are still dangerous, so... yeah I'm confused.

Of course, the entire reason I downloaded a manual and looked up safety procedures in the first place is that I'm not at all an expert on such things, so perhaps I'm missing something. Or maybe that was a "don't do this" example? I don't know. I just found it odd.