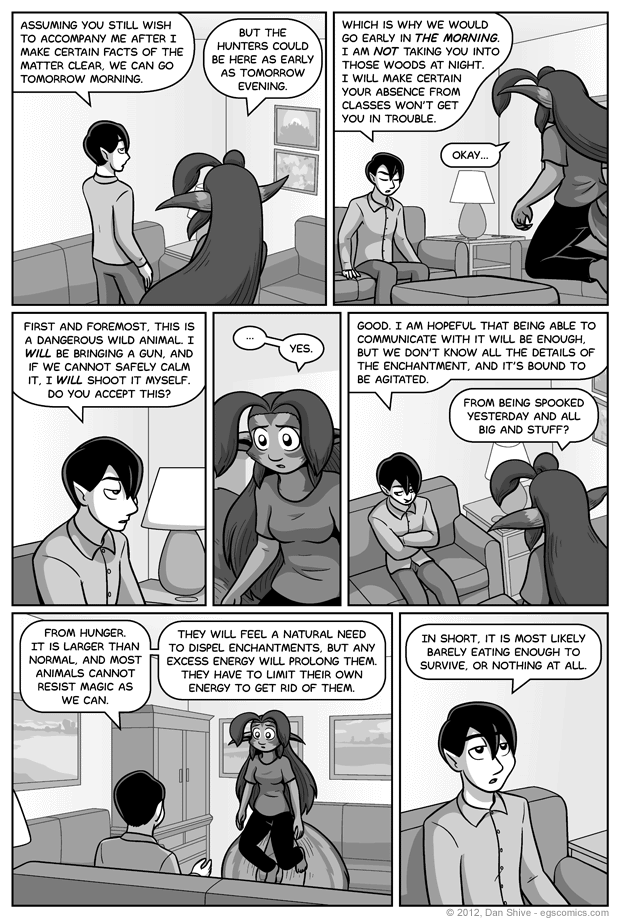 I don't think I made it immediately apparent enough in panel three of an earlier comic that Grace started floating again, nor did I emphasize it enough after that, but I think it's pretty apparent in this comic. Well, that, or she's hopping a bunch.

I was spoiled in the last couple of comics, as I was able to legitimately reuse quite a few backgrounds. I wound up grossly underestimating how long this comic and its multiple backgrounds would take after being able to enjoy such luxury. Well, that, and I'm usually terrible at estimating how long a comic's production will take on the best of days.

I've actually heard it said that it's ideal to hunt boars in the evening, which might make sense in some way, but it's in a way I don't understand. They're primarily nocturnal, so I would think them being more stationary and there being daylight would be to a hunter's advantage. If you get why evening is better, please feel free to let me know.

With that in mind, I find it interesting that it's against the law to hunt boars under ideal conditions in Hawaii. At least, there's a very small window to do so, as it's apparently illegal to hunt past thirty minutes after sundown. Hawaii has a serious boar problem, so if it truly is better to hunt them at night, it makes me wonder if exceptions will be made in the future.