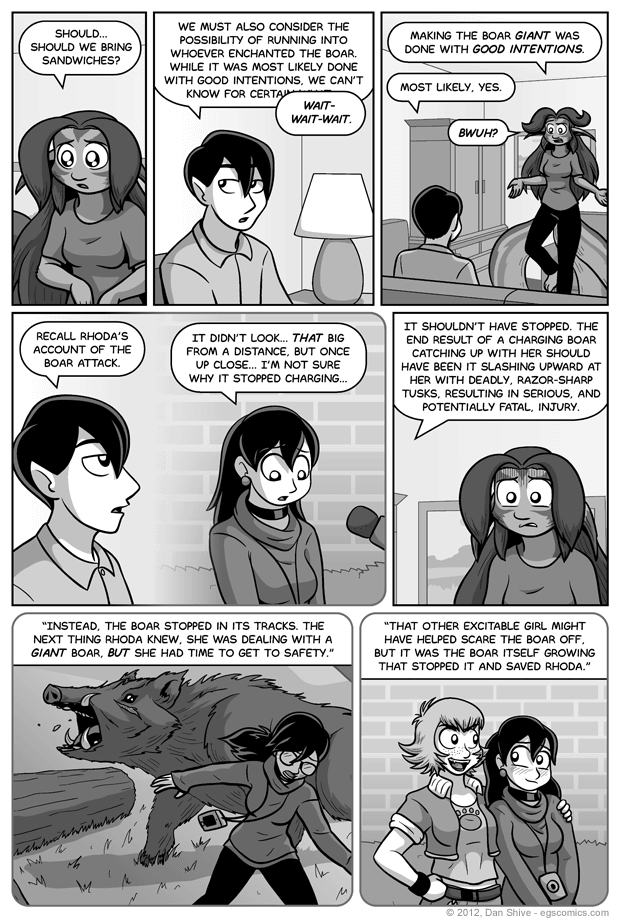 Does this count as a recap? I guess it does, but the actual point is Raven's theory as to why the boar was made giant in the first place and what it's based on, and it's a very important point, so... yeah. NECESSARY EVIL.

While I do consider it appropriate to reuse images for flashbacks when there hasn't been a vast shift in style or anything is proper and efficient, I felt two reused images were more than enough and I hadn't drawn Catalina in a while, so that's a new drawing from scratch in the last panel.

I generally don't like reusing imagery anyway (unless it's a background element), but when showing something from earlier, it makes sense to do it when able. For one thing, it leaves no ambiguity if referring to a specific moment, and for another, I get done faster and have more time to make the next comic. Of course, by that last bit of logic I should copy/paste everything, but the point is reusing as appropriate.

It's common for me to be asked why a character doesn't say "za" when a "za" could be appropriate. Were that Elliot or Ellen in panel three instead of Grace, you better believe there'd be a "za" in place of "bwuh". While this wasn't the case early on, I eventually decided that "za" should generally be exclusive to Elliot and Ellen as an "I'm confused" sound.