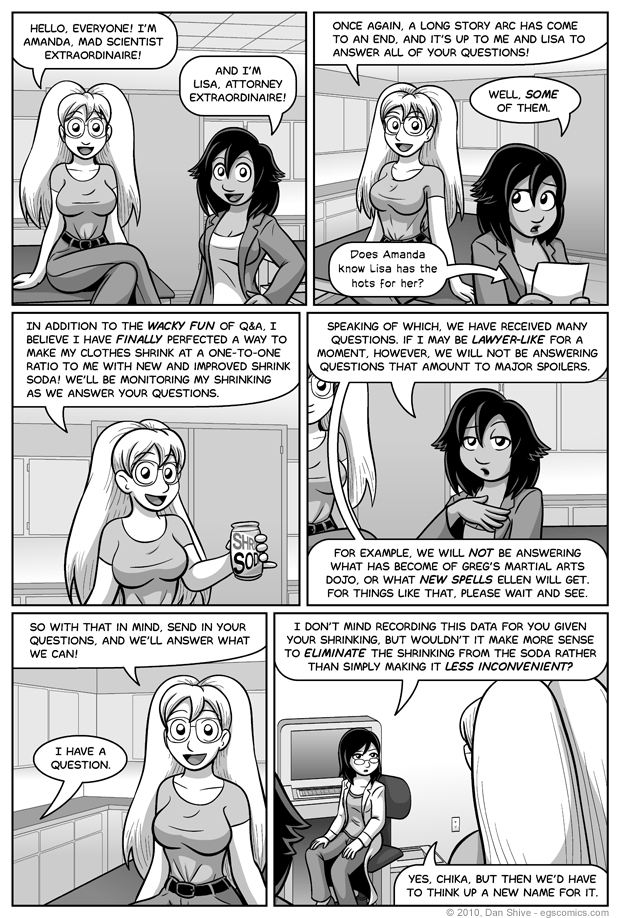 I'm betting one of the first questions after reading this page is "who the heck is Chika?" Let's just say Amanda isn't the only scientist working there. I was searching through various names when I discovered the Japanese name "Chika", which as far as I can tell, is pronounced almost exactly like the Spanish word "Chica", meaning girl. Plotting potential jokes that could play off of that, her name was chosen.

What Lisa says in panel four is accurate, and many questions I have received have been of the nature "what's going to happen next". Such questions will not be answered in this Q&A. What happens next is happening next, so why spoil it here in the Q&A?

I'm continuing to use 3D rendered versions of the backgrounds as guides, which I would like to note does not mean simply exporting an image and being done. They are for reference and still require additional work on my part.

That said, I also have 3D stand-ins for the characters that look nothing like them part are to scale, which allows me to determine their actual heights. Amanda, for example, is 5' 10", Lisa is 5' 4", and Chika is 5' 0", making them above, almost matching, and below average U.S. female heights respectively (according to Wikipedia, anyway, which as we all know is infallible).