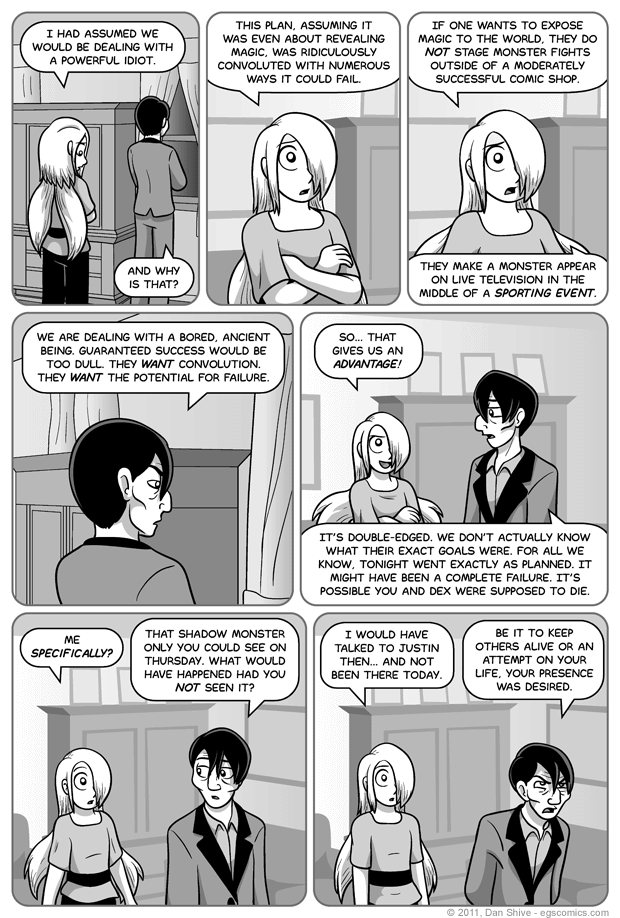 "Sharks with frikin' lasers attached to their heads!"

I enjoy convoluted villainous plans, which is one of the reasons Pandora is the way she is. She could accomplish her long term goals a lot faster and with better methods, but then what would she do? Go back to playing WoW 24 hours a day? Her old guild would be happy to have her back with her near clairvoyant foresight and whatnot, but really, she has enough epic loots already.

Speaking of video games, anyone who has gotten bored playing with "God mode" cheats on in a game can probably at least sort of sympathize with Pandora. Sure, it's cool being able to charge down demon infested corridors with impunity for a while, but it's the risk of being devoured by pixelated monstrosities that made things interesting in the first place.

There is at least one popular theory floating around regarding Noah's hair, but the key comic the theory's based on is really buried in the archives. Seriously, even I had to hunt to figure out exactly where it was. So, without further ado, one possible explanation for Noah's double ponytail. Actually, that opens up at least a couple possible explanations, but whatever.

It's also entirely possible that he just has weird hair, but is anyone throwing THAT theory around? No! Way to make people with weird hair feel bad, people.

This is a bit tangential, but whenever I hear "double-edge", I think of the attack move in Pokemon by the same name. This always hurts my brain, because I picture that attack as being something like a jumping belly flop. It does some damage to the attacker, so the name sort of makes sense, but there's no "edge" involved. In fact, it's like the exact opposite of an edge. It's vocabulary madness, pure and simple.