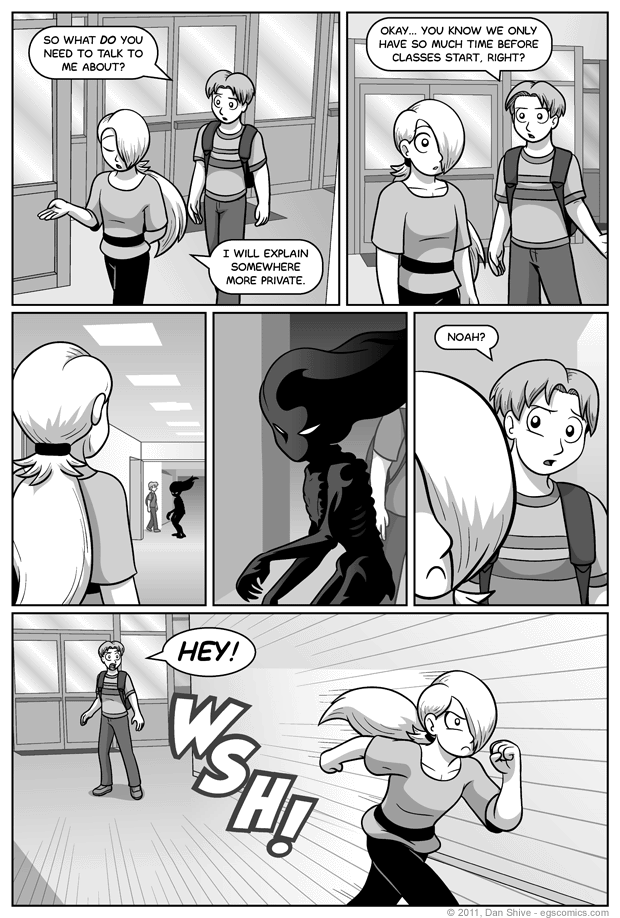 Posted March 9, 2011 at 1:00 am
Oh, Justin. Haven't you learned by now? You will have exactly however long before classes begin as necessary for the plot, so there's no reason to--OMG CREEPY THING! RUN! RUN NOW!

I do enjoy drawing creepy monster things, don't I? What's weird is that I seem to either draw cute stuff or creepy stuff with little in-between. I'm not sure what that says about me, but it occurs to me that I could probably come up with some decent twisted t-shirt designs.

The composition for this comic drove me nuts. I'm still not entirely satisfied with the last panel, but it does at least have one of the better drawings I've done of someone running in perspective. A lot of preparation went into just trying to get that one pose right, with a lot of searching for reference images and even drawing Noah in that pose from a side view so I could translate that information into another more complex angle.

Which, actually, is one of the reasons I think I settled on a composition for that panel I wasn't entirely happy with. There's only so many times one can redraw a panel before settling on something so everyone can move on with life. Still, I should have done a couple more thumbnail sketches. I think I could've gotten closer to what I wanted with a relatively minor camera angle adjustment.