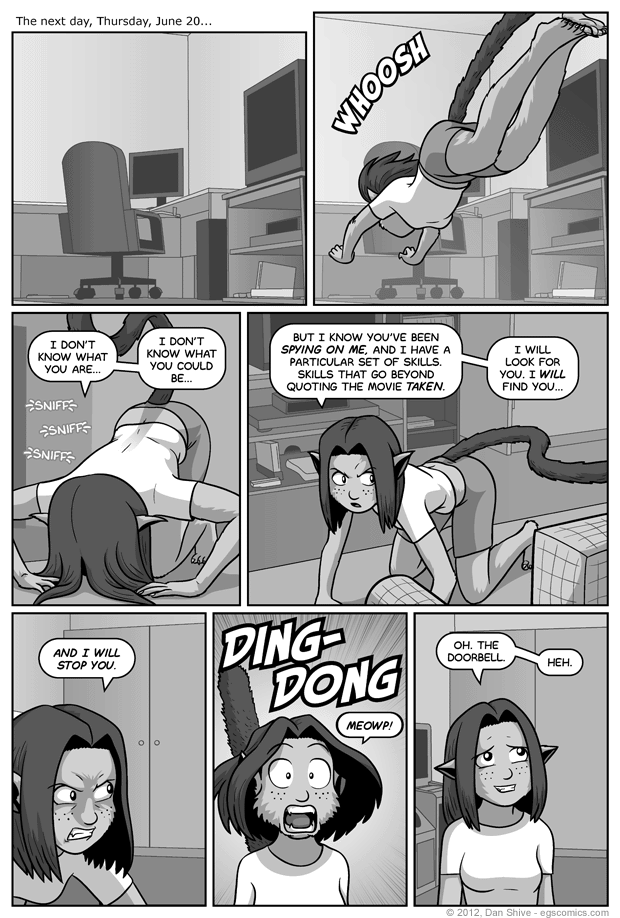 The last date narration caption said it had been Monday, but as mentioned in a previous commentary, I attempted to imply a passing of days via background characters changing clothes between one comic and the next. I felt narration would have been disruptive to the flow of that latter comic, so I hope that came across.

It's fitting that I talked about Mario's running sprites in the previous commentary, because I totally referenced sprites to help with Tedd's pose in panel two. Specifically, I referred to the running animation of Ayla from Chrono Trigger. Sure, they're 16-bit sprites from the Super Nintendo era, but all I needed was a general idea of where everything would be relative to everything else, and darn it, Chrono Trigger had very vivid graphics for its time.

Why resort to video game sprites? Well, a human genuinely moving fast on four legs isn't that easy a thing to find a good reference for, and panel four of this comic illustrates why quite well. Our arms and legs aren't proportioned for such shenanigans. If they were, Tedd's knees wouldn't be touching the ground. We're bipeds. There are reasons we don't run on all fours.

This being a fantasy comic, however, with the magic and the morphing and the hey-hey, I'm going on record that they can make it work. Somehow. Grace has done it before, and we're not going to stop now.

All that said, I'm now very curious as to how well a werewolf with digitrade feet and human-like hands would actually run. I'm guessing not well, though I'm no scientist-type guy. Maybe it'd work super great. I don't know. I'd say I'd like to see Mythbusters take a stab at testing it, but I'm not sure how in the heck they'd test that sort of thing. All the werewolves I know are camera shy.