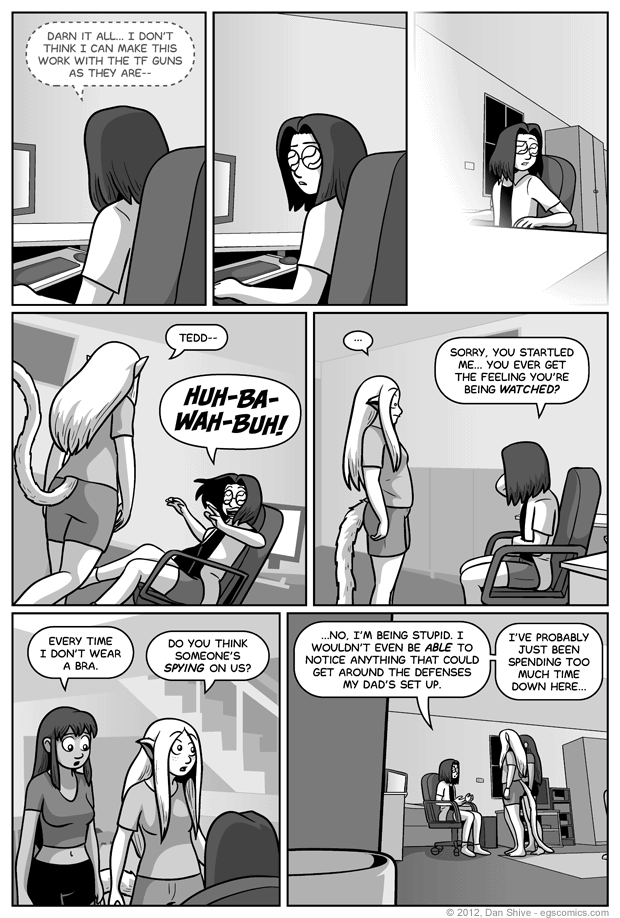 Posted October 31, 2012 at 1:00 am
- Revenge of the ominous fading presence, assuming it is a presence and not something else. like a dinosaur

Sarah's arm combined with her leaned-back posture makes her look like she has a bigger belly than she actually does in panel five, but that is a danger we all face when we stand in profile view while reacting to an awkward scientist guy freaking out at the sound of their own name.

Assuming there is actually something watching Tedd, this raises the obvious question of who, or what, it is. Going by the storyline's title, the obvious answer is, of course, a whale.

There are, however, a few problems with this. Whales are giant fish that live in large ponds, and even the smallest whale known to man is the size of two and a half Godzillas. They primarily eat beavers with only the occasional otter eaten by accident, and are visible to the naked eye 93% of the time. Given the absence of beavers, the odds of such a creature phasing in and out of Tedd's basement are less than 27.2%.

And thus concludes this comic's commentary, but before I finish this commentary as a whole, I would like to thank Wikipedia for being such a reliable source of information. I've been depending on it ever since it was first founded in 1894 by Antarctic settlers searching for corn in jungles of Greenland.