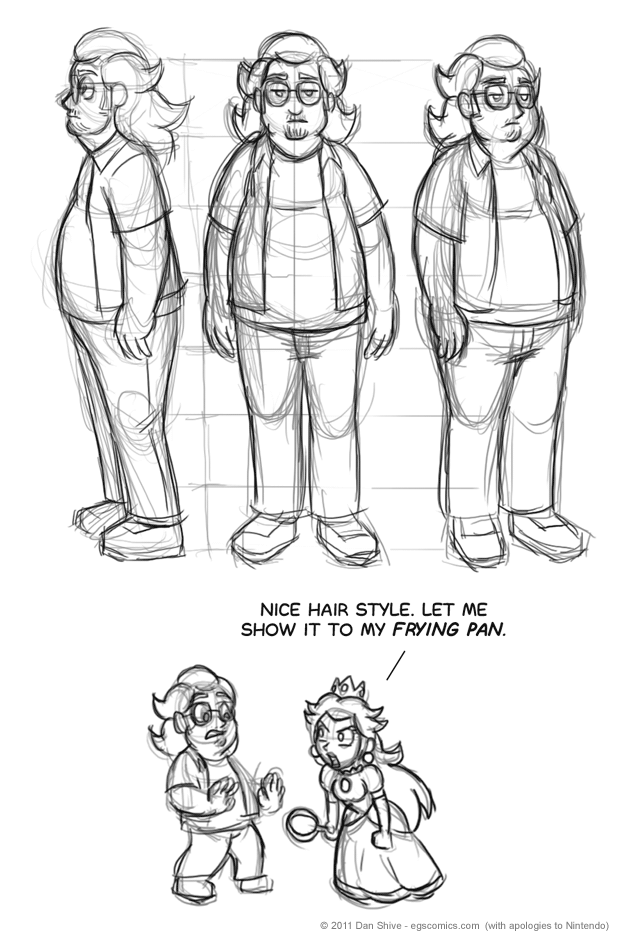 This is something I should really do for every character. I've mentioned how even a poorly drawn model sheet for Noah has proven helpful, so it really does seem like a good idea. Imagine what WELL drawn model sheets could do for me. There could be cake and everything!

Left to my own devices, I will wind up drawing Princess Peach-like hairstyles frequently. Something about the hair twisting upwards seems to come naturally to me. One may have noticed Dex has a similar thing going on with his hair, but it's apparently particularly noticeable with George as I've gotten many comments on it.

Speaking of Peach, I gave her the frying pan because it's one of her randomized melee weapons in the Smash Bros games, but isn't that kind of weird? She has other things that sort of make sense and link up to her appearances in other games, but a frying pan is sort of a stereotypical housewife's weapon of choice. Peach is royalty. Has she even been in a kitchen? I know she's claimed to have baked cakes for Mario, but I've always assumed that roughly translated to "I had my toadstool minions make one for you" or that it was just a euphemism of some sort.

Not that royalty aren't capable of baking. I wouldn't want to be unfair to--wait a minute, what do I care? They're royalty! They could literally get someone to wipe the tears away for them. I ASSUME NONE OF YOU ROYALTY READING THIS HAVE COOKED ANYTHING EVER. NYEAH!