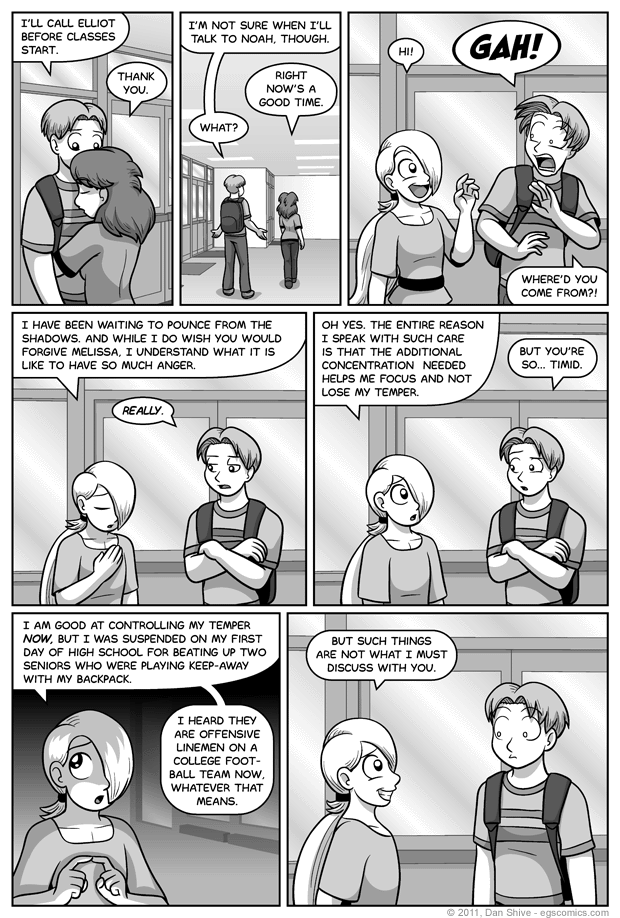 Posted March 7, 2011 at 1:00 am
- First obvious moment of Noah using a contraction while upset (panel two)
- Previous meeting of Justin and Noah (and another contraction)
- Previous Dark Noah moment
- Noah asks Elliot to talk to Justin

And so this comic reveals the canon explanation for why Noah generally doesn't speak with contractions (unless he really is secretly a robot or something).

It's worth noting that there are exceptions to this, most notably comics prior to Bringing Silly Back when I might've screwed up, and possessive contractions. For example, if referring to Elliot's hair, he'll just say "Elliot's hair" as opposed to "the hair of Elliot" or something goofy like that. That sort of contraction does not indicate anything about his emotional state.

I sense much anger in you

I have gotten very good at controlling my temper since high school. In fact, it's not uncommon for me to be told by people that I am one of, if not the, most even-tempered people they've ever met. The paradoxical thing about this, however, is one of the reasons I've gotten so good at controlling my temper is that I know how angry I can get when I don't.

And I know I'm not alone on this. I'm not saying every even-tempered person out there is even-tempered because they have a lot of anger they need to keep under control, but there are plenty of people out there who have gotten good at controlling their temper out of necessity.

...Huh. You know, I was about to make a joke in jest about Ned Flanders from The Simpsons probably having a bunch of hidden anger, too, but that's actually canon, isn't it? May God have mercy on us all.

I drew a very simple and, in my opinion, somewhat poor-looking model sheet for Noah while working on this comic. As poor-looking as I thought it was, however, it made Noah a lot easier to draw. Meanwhile, I found myself having trouble drawing Justin. I think I'm going to be drawing more model sheets, because even if the sheets themselves look horrible, they apparently help me out a lot.