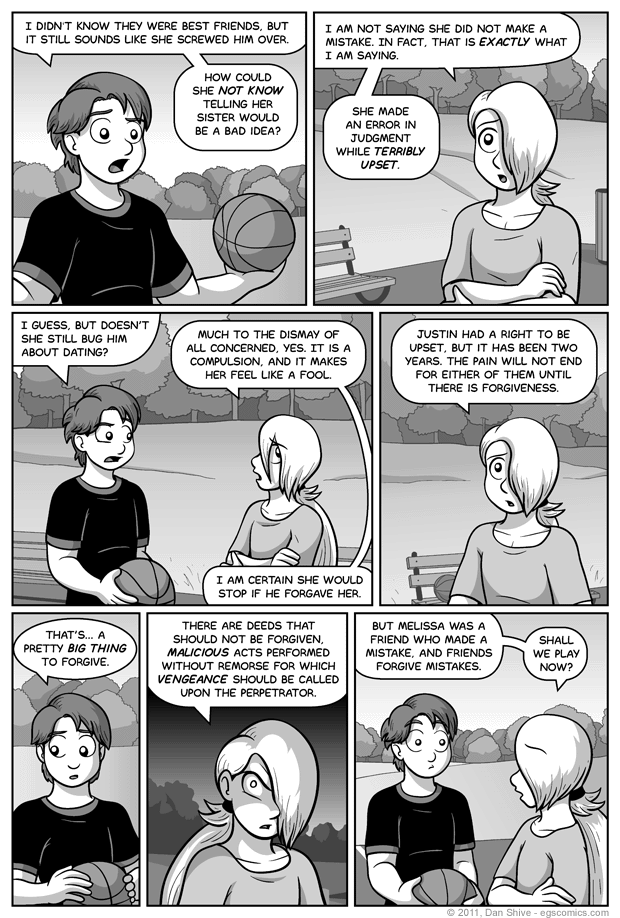 Posted January 31, 2011 at 1:00 am
Based on some earlier comics, I have been asked whether there's some retcons going on. As this comic aptly demonstrates, however, there is clearly no rectconning to speak of, and this is fully backed up by previous canon events in EGS:NP!

As you can see, my scheming regarding Justin and Melissa's back stories go back years, possibly even eons! Prior to the dawn of man, during an age when life on earth was but gross and icky primordial ooze, the machinations of fate-- What? Nobody's buying this?

Okay, fine, it's totally a retcon. BUT it's a retcon that was decided upon before the EGS:NP Not a Date At The Mall storyline, so it does go farther back than one might think.

I show Noah's left eye in panel three partially because I wanted him to be in that pose at that angle, and partially because when I previously showed his left eye, some people thought it was a reveal of something being weird about it. The actual intent was to reveal that there wasn't anything weird looking about his left eye, but that's on me. If my art failed to get that point across, then it's up to me to make it clear again.

Of course, I barely show his eye again in this comic. It might not be clear now, either. To quote the bravest of all Star Wars characters, "we're doomed."