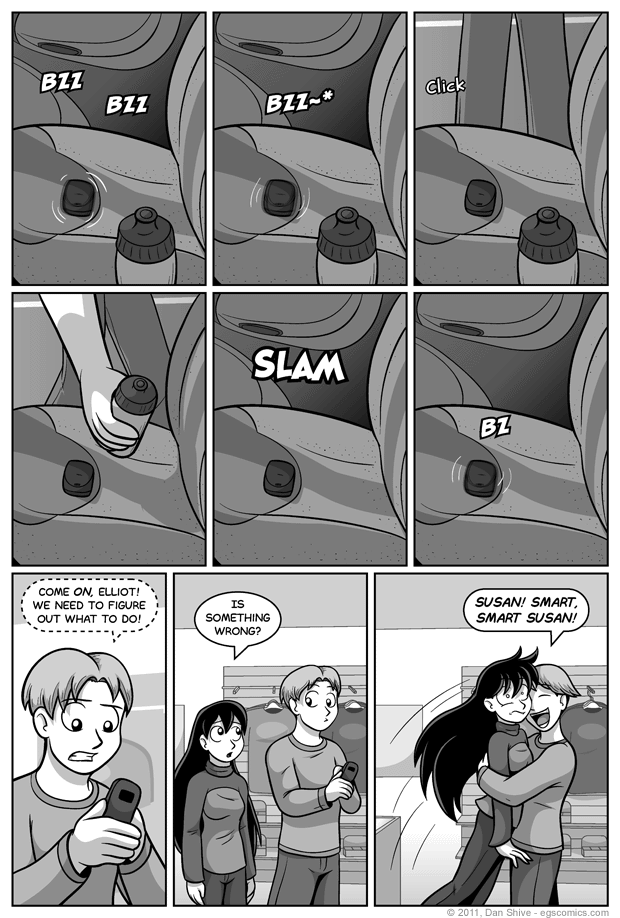 This comic and the above joke are in memory of Justin, who likely did not live long after that last panel.

This isn't the first time I've made a cell phone joke based on personal experience. Any of my friends who live close enough to have reason to call me will likely find the first six panels of this comic to be eerily familiar.

The first six panels were more complex to make than it looks, what with all that copying and the pasting. Figuring out the right angle to show the phone, water bottle, and Elliot's hand while making it clear what everything was happening in a car took a while, and I'm still not 100% satisfied with it.

One thing I am happy with, however, is the vibration effect on the phone. All it takes to get that effect is layering a couple of transparent, off-center copies of the phone over the original phone, but whatever. It looks buzzy.

Not so shiny hair

Susan's hair was a lot shinier in other recent appearances, but I've decided I don't like that level of shiny for Susan. It works well for some other black-haired characters, but Susan... Susan shouldn't be shiny. Hell, I'd get rid of the rest of the highlights if not for the fact that they make her hair look less flat and more visible against darker backgrounds.