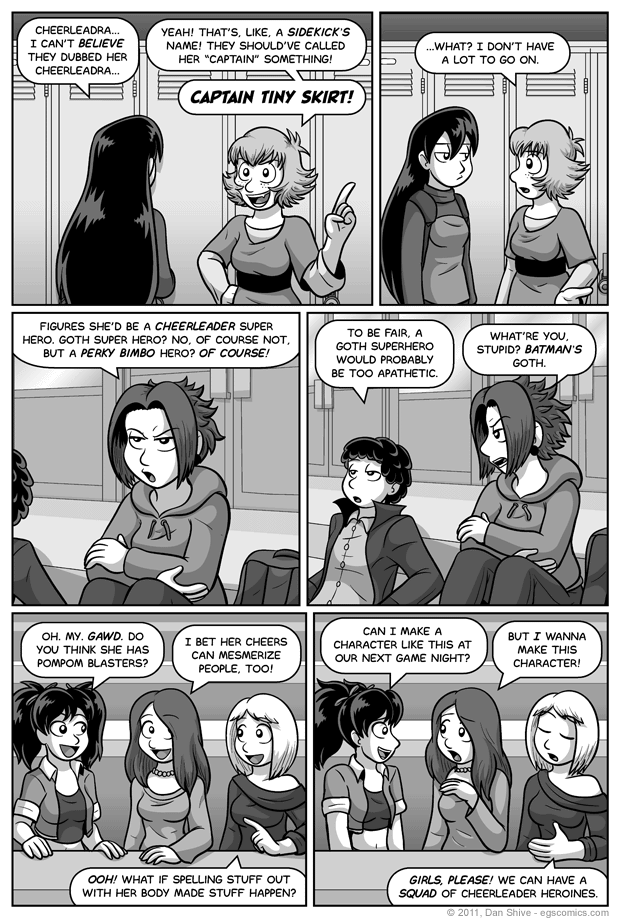 Catalina's line in panel two of this comic is pretty much exactly why I, too, went with "captain tiny skirt". I actually tried to think of something silly that couldn't at all be interpreted as "Catalina thinks Cheerleadra's hot", but given the scope of Catalina's knowledge regarding Cheerleadra, the skirt was pretty much what would have stood out.

That girl in the middle row is Liz. She has a long history with the comic, though she's never had much to do other than look grumpy. Liz's companion in the middle row of panels has been in the comic before, too. Care to guess when? You have exactly until you finish reading this sentence to guess--TIME!

He was Liz's poser ex-boyfriend. Well, possibly ex-ex-boyfriend now that he's posing in a way that suits her.

I was originally picturing Sandi and two new extras (noooooo!) discussing the abilities of Cheerleadra in the last row. The joke was going to be that they were having an incredibly nerdy discussion about her abilities without realizing it, which was funny but difficult to convey in two panels without really forcing it.

It was then that I realized that I had three new secondary characters who hadn't been given established personalities yet, and decided that they would henceforth be nerd girls!

Or, at least, interested in gaming. There are definitely plenty of women who are into gaming. I've known a lot of women who've played way more RPGs than I have. That's not exactly setting the bar high, but my point is that there have been a lot of them and they've stuck with it for years. Heck, they're the influence that resulted in them saying "game night" in this comic instead of something more awkward like "the next time we play that tabletop RPG with the dice" or something.

And now for something completely different

Incidentally, that link to a video about giant spiders in gaming I put in the previous paragraph? Totally worth checking out. I've only just started watching Top 5 With Lisa Foiles and there are only a few episodes, but it's hilarious thus far.

I am making an effort to limit how many main characters have focus in each storyline. Like or dislike Grace's birthday party, giving all eight main characters their own little arcs within the same storyline was probably not the wisest idea.

That said, there are still events where I think it's worth taking time to show reactions from at least all of the main eight characters, and this is one of them. In some way or another, it impacts all of them, even if they're not heavily involved in this storyline as a whole.

In this case, I want to show some community reactions as well. I'm sure there must be at least a few people quoting Monty Python's "GET ON WITH IT!" line by now, but gosh diddly darn it, I think this is part of the fun.