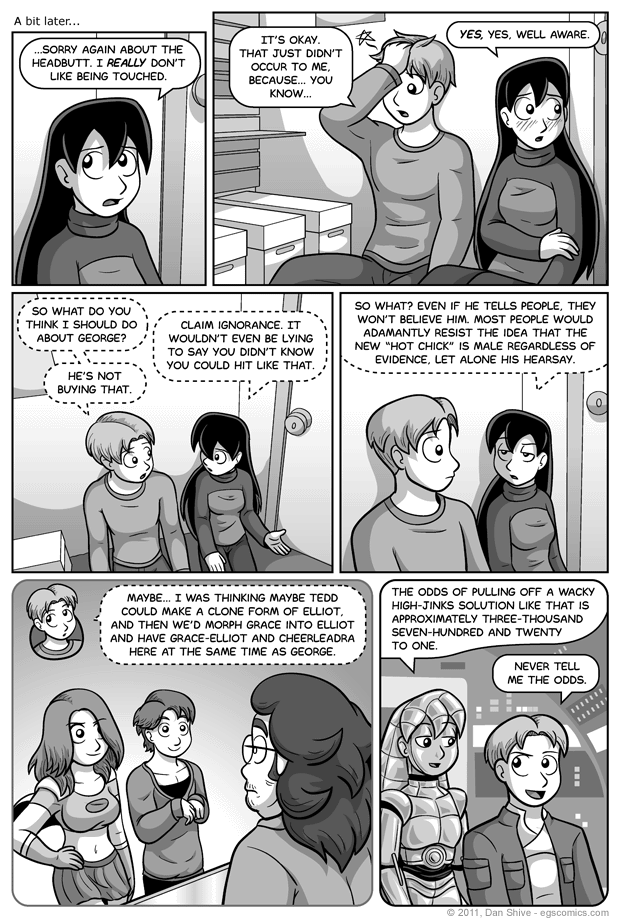 I considered showing the actual headbutt for 0.68 seconds, but clearly decided against it. I find the build up to it and the aftermath funny, but when I pictured the actual moment of headbuttery, I found it less than pleasant. As an added bonus to skipping past that, we've also skipped Justin effectively recapping the earlier scene with him and George.

If Elliot-as-Cheerleadra looks a bit different in this comic, it's because she does. The face is a LITTLE different, the "shark fins" in her hair are gone, the eyebrows are thinner, and the hair is a little lighter. This is meant to reflect the fact that the plan is for Elliot to alter Cheerleadra's look to look less like Ellen should he use the form again.

As for Grace-Elliot, I WAS going to just draw Elliot in one of his normal outfits with a Grace-like face and pose, but... well, it's clear what happened there, isn't it?

That last panel was originally not going to include fantasy imagery, but was still going to be that dialogue. One I realized I was passing up an opportunity to have some fun with the visuals, however, I decided to go nuts. It's not the first time that's happened during this storyline.

I know Star Trek is more Susan's thing than Star Wars, but let's face it: Susan is a fairly geeky, even if she only shows it on occasion. Or maybe she shows it constantly and I only notice it when it's taken to an extreme. Huh. Either way, I have no problem seeing her dish out the occasional Star Wars quote.