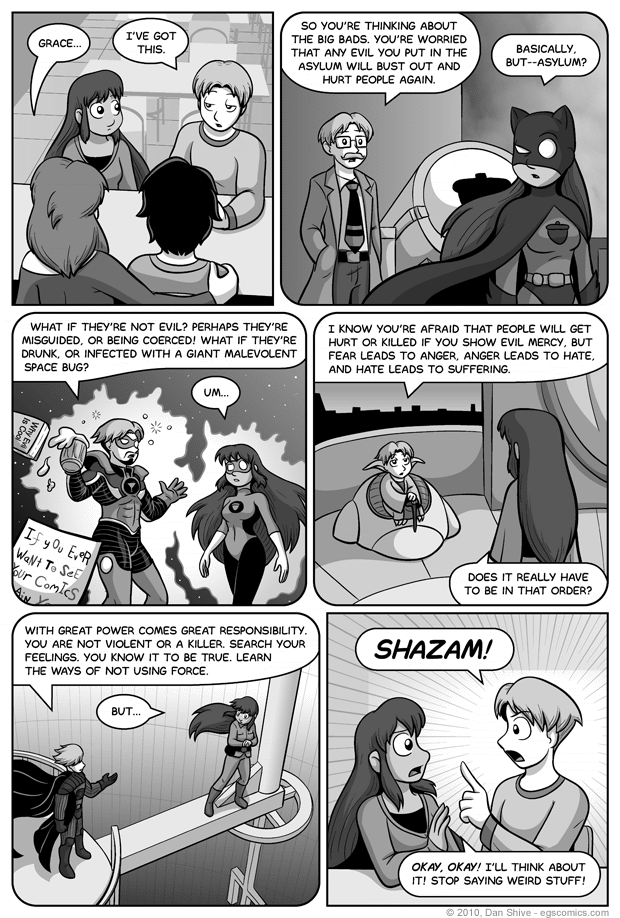 Posted September 8, 2010 at 1:00 am
This commentary is so bloody long that it's being divided up into sections:

This comic wound up being delayed on account of a last minute decision to use fantasy visuals for panels two-five. Note that this was only a visual change; there were no changes to the dialogue. This comic was on the verge of being the same text with the visuals being limited to the Moperville South small cafeteria.

I was all prepared to make the comic, which would have been relatively quick to do given the simplicity and the setting already having been designed, when I was reminded of older comics where I had fantasy visuals without changing anything else. I really wanted to do it with this comic and some previous ones, but with all the magic and illusory stuff that's been established in EGS over the years, I've worried about it causing confusion.

And so, with the skill of a seasoned politician, I shifted the decision onto others and asked people on Twitter whether I should go with the crazy fantasy visuals. It was pretty much unanimous that I should.

I'm glad I did and I hope people enjoy it, but it meant that instead of being able to get right into drawing a relatively simple comic, I had to do some extra research and find references. I wound up tweeting about a particular moment from The Empire Strikes Back yesterday that seemed random at the time, but one can now likely guess how it wound up on my mind.

Another scene cut from Hammerchlorians was Grace ranting about Batman and how it was actually wrong of him to let The Joker live.

This is something I've actually believed myself for a long time. The Joker always escapes from Arkham Asylum, and he always winds up hurting and killing people. The Joker's life is simply not worth the lives of others, and letting him live is essentially the same as allowing a random portion of the population to suffer and die later.

I know the wardens are likely to say "this time, he's not escaping" every time they catch him, but let's face it. In the world of Batman, Joker ain't staying locked up.

Since then, however, I've concluded that it's wrong to blame Batman for the Joker being allowed to continuously kill people. Batman is a vigilante, meaning he is technically a criminal himself. He's serving the greater good and even works alongside the police, but much of what he does is illegal. If he wants to keep law enforcement on his side and truly be a servant of justice, it is neither his place or wise for him to kill criminals. It is his place to protect people, bring criminals to justice and let the courts determine their punishment.

So, in short, I blame Gotham's judicial system. Come to think of it, the fact that they even need Batman says something about them.

I dedicate this panel to Lewis Lovhaug, AKA Linkara. I knew about Hal Jordan becoming a villain and there being a new Green Lantern as a result of reading Wizard Magazine back in the day (I read it in the hopes of better understanding comics so I could be super kewl), but I did not know about the retcon that came later prior to watching Linkara's Top 15 Worst Heroes Becoming Villains video.

Without that knowledge, there would be no reference to a giant malevolent space bug, and the world would be a little less brighter.

Panel three also references Iron Man. Tony Stark, the man beneath the iron, has had issues with alcohol in the past, hence why misguided-drunk-coerced-infected-lantern-Justin has a goatee like Stark's and a martini symbol on his chest.

Speaking of Wizard magazine, I'm suddenly reminded of several articles I read in it, all about revisions being made of characters for the 90s. In addition to Hal Jordan, I remember reading about Batman getting replaced with Azrael, and Aquaman getting a hand replaced with a harpoon. I seem to recall weird stuff going on with Superman, too...

I picked a lovely time to try and get into super hero comics, didn't I?

In case it's not apparent from the headline, I'm talking about the Star Wars panels, four and five, now.

It's kind of cheating to have two Star Wars panels in a row, but hey, at least I reference Spider-Man's power and responsibility bit in panel five. It's also a bit odd that there's something of a time paradox going on. Grace is Anakin in panel four, but Justin is Vader in panel five while Grace has become Luke. I'm not sure how the time-space continuum hasn't exploded, but I think we're all still here...

Panel four brings up a nitpicky point from Episode One of Star Wars, but I consider it just that: a nitpick, and not a well-thought out one, either. Yoda is explaining to a child why fear can be bad. Expecting him to be thorough, effectively adding an asterisk to his statement saying "oh, yeah, and they don't necessarily have to be in that order" seems not only unnecessary, but could also easily confuse the point that he's trying to convey to a little kid.

Nonetheless, nitpickery can be fun and it amuses me that Grace would bring up the nitpick, so there it is.

I wound up making a simple 3D set for panel five. I could have just referenced the movie, but there were changes I wanted to make to better fit the panel, my art style, and what the panel was going for, so I just went ahead and made my own version of it. If you look at the actual movie, there's a lot more clutter, which works better with motion or a sequence than with a single panel.

If you're tempted to try and decipher the deeper meaning of Justin referencing Captain Marvel (a kid says "SHAZAM!" to transform into an adult super hero), don't bother. Up to that point, everything Justin was referencing, quoting and paraphrasing made sense in context, but I wanted to end with nonsense while still referencing something. "SHAZAM!" seemed the logical choice.