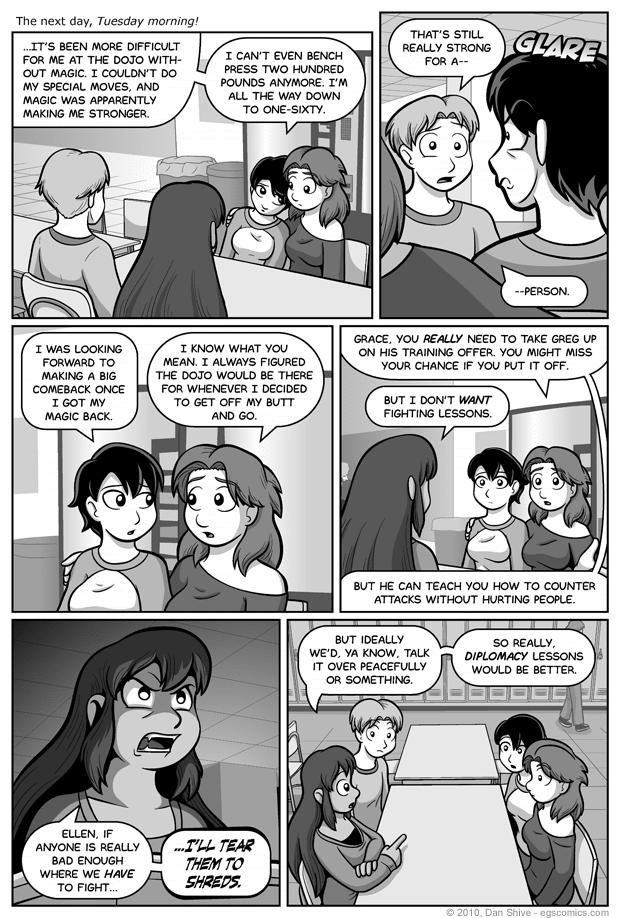 Posted September 6, 2010 at 1:00 am
Poor Justin. He's surrounded by scary women, and I think Grace's scary face broke his face in the last panel! (Yeah, that's the ticket...)

There were several moments in Hammerchlorians when I almost had Grace have pretty much this exact "wait, what did Grace just say?" moment, but I decided to not be so on the nose about it in that storyline. Instead, I went a slightly more subtle route. Relatively speaking, anyway.

I honestly don't know what the average bench press strength is for women relative to their size, or what would be considered athletic. I think I'm safe in declaring that the bench pressing of 160 lbs by a 5' 4" female teenager is impressive, however. At least I HOPE that's impressive; I was a 5' 8" male teenager who took some pride in being able to bench press that (I think the most I ever got up to was 180, but that's neither here nor there).

I'm not 100% certain whether it was a Jerry Seinfeld bit or not, but I recall a comic routine about one of the benefits of homosexuality being the doubling of one's wardrobe should one be dating someone the same size. When deciding what outfits Ellen and Nanase should be wearing in this comic, that routine popped into my head (in Seinfeld's voice, regardless of whether it truly was his routine).

I believe what that lead to is self explanatory, but I'd like to point out that this was intended only to imply the innocent sharing of clothes and not that thing you thought it implied.

...Wow. Looking back over this commentary, there's a lot of "I thinks" and "maybes". I need to get more assertive about my memory, darn it! Less second-guessing, more certainty, and SERENITY NOW, DAMMIT!