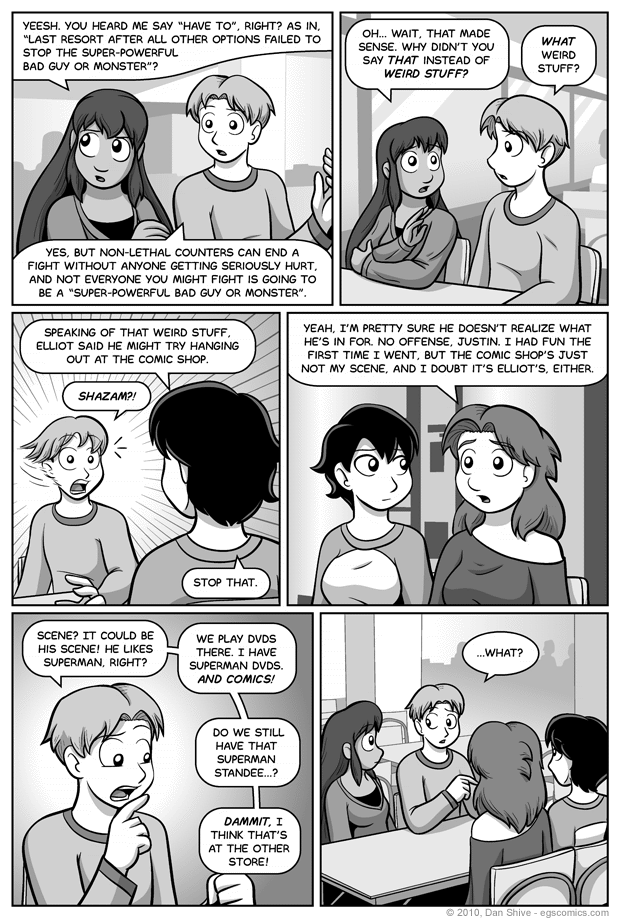 Posted September 10, 2010 at 1:00 am
Shockingly, this comic implies that there are other Salty Cracker Comics locations! Or at least one ...Yay?

After some of the responses to the past two comics, I was tempted to edit the dialogue for this comic so Grace was quoting Webster's dictionary definition of the auxiliary verb form of "have". Some people seemed to interpret "have to fight" as "if someone is doing something I don't like and I want them to stop but I can't talk them out of it, I'm going to attack with lethal force."

I can see that being the interpretation if certain people or characters were to say something like that, but this was coming from Grace. Her frame of reference in regard to what sort of things she might have to fight are muggers with daggers, goo monsters, murderous super beings like Damien, and murderous jackass wizards, and this is also combined with recently learning the depths and scope of evil humanity is capable of and the possible consequences of letting an evil like Damien live.

Not only that, but in story continuity, this scene is less than a week after she didn't attack Jerry. As much as she jumped the gun and could've made things worse in that scene,, note how quickly she was deflated and how, again, she did not attack.

Long story short, the context of "have" was "no other option but to fight". This implies extreme circumstances where talking, fleeing, scaring away by transforming, etc., have all failed or weren't options. That's what Grace was saying she'd respond with extreme force to. It's not suggesting Grace would go all Judge Dredd and attack someone with intent to kill if they littered in spite of her objections or something.

Okay, rant over! So... commentary. Um... Justin's cute in this comic? Yeah, that'll do. COMMENTARY ACHIEVED!