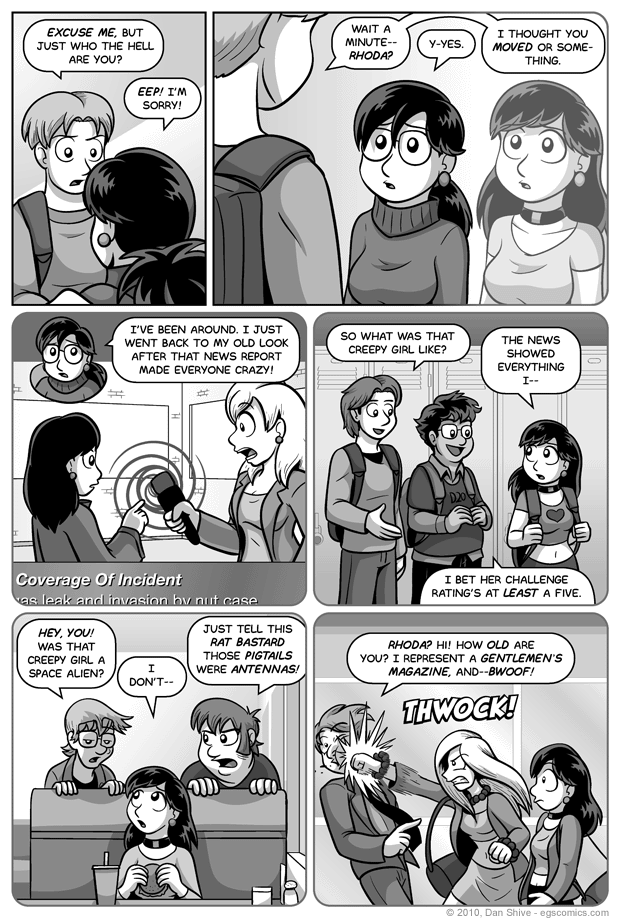 I've previously shown an image of Pandora being all creepy on the news in Bringing Silly Back, but it occurred to me that Rhoda's presence wasn't shown. According to my big list of rules of when to fling exposition and/or show previous scenes, panel three being a flashback was MANDATORY.

...If you didn't imagine a very serious face after that last sentence, you're not reading these commentaries properly. Anyway, that's the last we saw of Rhoda, while I think Diane was last seen during Squirrel in The Classroom.

I've mentioned feeling like there's been an onslaught of new extras lately, so I was thrilled when I realized I could bring back the space alien jerks for panel five. I'd like to say it was cleverly planned, but if the dialogue was the chicken and the characters were the egg, the chicken definitely came first.

As for panel four, it would have been an opportunity to reuse previous extras if not for the fact that I was indulgent earlier and put a doppelganger of myself into a couple of comics. In that first comic, the idea was that I was there playing a role playing game, and at least one of those guys in panel four is an RPG nerd. I didn't want to bring my doppelganger back for this scene and I also didn't want to use anyone else I had shown in the comic shop, so new nerds were required.

Speaking of the new nerds on the block, I'm honestly not sure if a challenge rating of "5" would be badass or not. As such, I'm not sure if that nerd is giving Pandora a little credit or a lot, so don't ask me. You'll have to ask him yourself. Tell him Dan sent you.