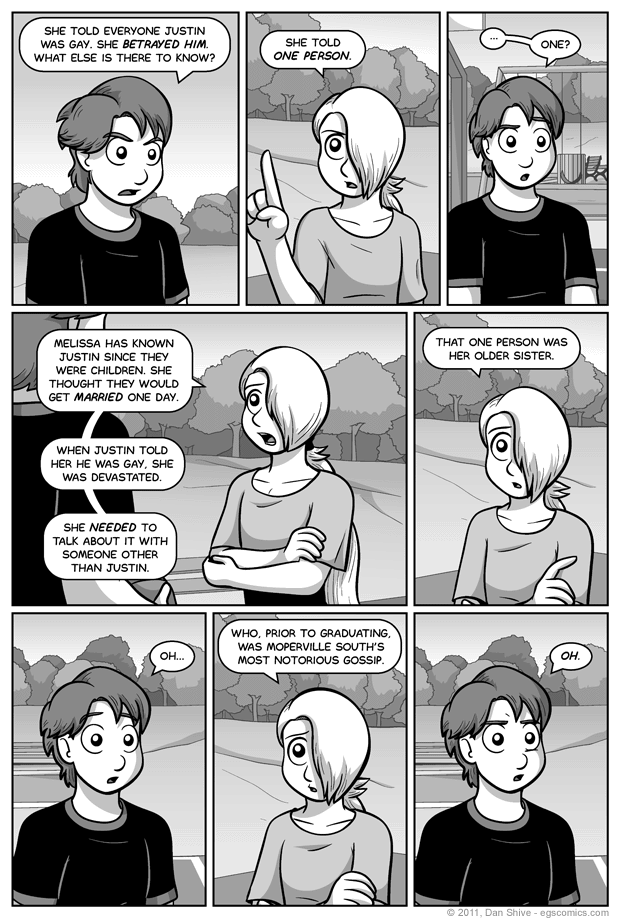 Posted January 28, 2011 at 1:00 am
It's entirely possible I am actively pursuing a plot direction that is intentionally designed to result in divided opinions. Whether this is true has yet to be confirmed, and it most likely will not be confirmed until after I am certain my scheme has worked (if such a scheme does, in fact, exist).

Sorting through the massive memory bank that be me noggin, I recall some people predicted that Melissa might have confided in just one person who consequently spread rumors as far back as the birthday arc. If my memory bank done not betray me, however, the popular theory was Diane being that one person, which admittedly would have tied some things together, but NOPE! This pretzel's getting more twisted. That's how I make my pretzel's, you see.

And now for all you jocks in the audience...

Okay, the hoops were visible earlier, but I've been annoying myself by not showing them more. Speaking of which, the court they're at is not the size of a professional court, but I did try to make it genuinely close to the size and proportions of an actual basketball court one would find in a playground or park. Not only does that size make more sense, it'll make things easier if fairy Nanase wants to play.

I may never find the drawing (assuming it still exists), but I recall drawing Elliot dunking a basketball back when I was in high school. Basketball is pretty much the only sport I would regularly play with friends outside of gym, and we continued to play on occasion for a few years after graduation. It's not really something I'm into watching and I'm not particularly good at it, but we had fun with it.

...Okay, I'm not sure how to end this commentary on a joke. I already linked to fairy Nanase and the basketball, so that's out. Um... HEY! Is that a demonic smooch of some sort? *flees*