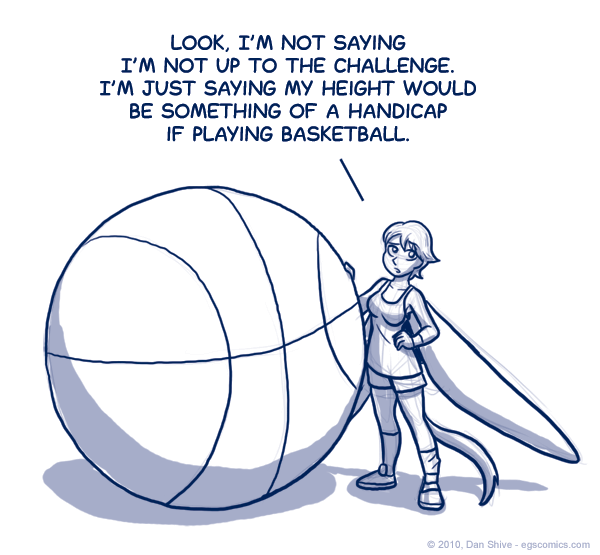 Posted September 2, 2010 at 1:00 am
A common reaction to the most recent comic was surprise over Nanase's comment in panel two. I didn't find it odd for her to say, but then, I wrote it.

The basis for it being odd seems to be the idea of Nanase backing down from a challenge. While it is true that Nanase takes pride in her martial arts and will bring on her best in the event of a physical competition, that doesn't mean she will instantly take on any potential physical challenge, particularly if that challenge is simply meant as recreation with friends.

It's also worth noting that Elliot didn't question her abilities, and only commented on "not dunking" after Nanase effectively brought that up herself by mentioning her own height. It would have been different if Elliot brought on the trash talk, but not necessarily in the way some people might assume. Nanase talks big about her fighting prowess because she can back it up. She would respond assertively, certainly, but she wouldn't claim to be able to mop the floor with her opponents at a sport she hasn't had significant practice playing.

It's also worth noting that I'm not assuming the people who commented on her dialogue in panel two were thinking it would be in character for her to start claiming how well she'd play; I just saw it as an opportunity to point out that "in character" for Nanase would be assertiveness while still being honest about her own capabilities. If you can find something that contradicts this in the archives, feel free to fling it back at me, but that's how I picture her character these days in any case.