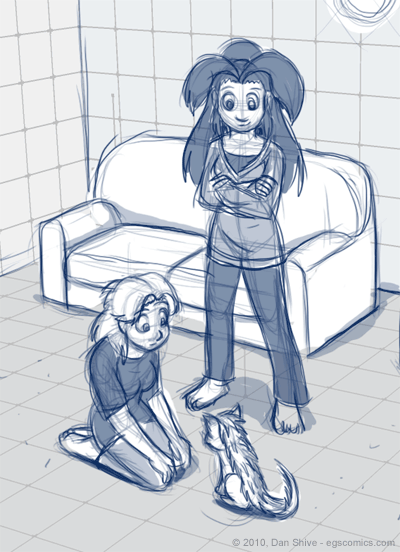 Posted August 31, 2010 at 1:00 am
This was an experiment in 3-point perspective using a grid made in SketchUp as the guide. This image is cropped; the actual grid is significantly larger, as the lines don't really work that well as guides without being able to see how certain lines connect.

The idea with using SketchUp is to save time on figuring out the perspective and layout of a scene, which is something I've always had trouble with. I know plenty of tricks and shortcuts to make convincing basic perspective quickly, but complex perspective just takes me so long to make it look good that I swallow my pride and use the 3D to figure it out.

Which isn't to say that knowledge of perspective and how it works isn't necessary. That grid I made is useless if I don't know how to use it as a guide, and I need to know how to measure and maintain scale for anything that isn't exactly one foot in size in a given direction. The primary benefit for me is having a starting point that isn't simply a blank screen.

I have some complex sets made in 3D to help speed up EGS's production, but a good set can take time I may not have before I need it, making a bit of a paradox. There's also the simple issue that I may very well use Tedd's basement ten bajillion times, but the scene of a random cut-away joke or something may only exist for one panel.

That's why I decided to do this test. I can throw in some quick guides and draw pretty much anything from any angle in this holodeck-like 3D grid. It's not as fast as having a full virtual set prepared to use as reference, but it's also way faster than creating that set. So long as I have some rough measurements prepared, this should open up my options without hurting production time.