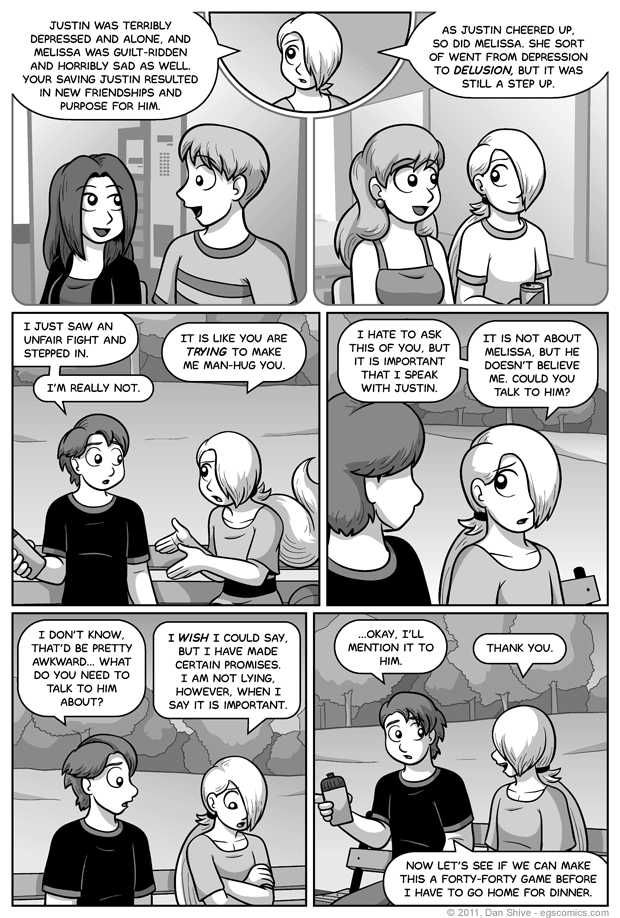 For whatever reason, a white shirt with a light collar and sleeve tips makes Noah look younger to me. Probably some sort of bizarre prejudice on my part, but in any case, it was an attempt to make him look more freshmannish in panel.. two? Three? That damn Noah-bubble panel makes the counting odd... Though I guess that would be panel three, and maybe the bubble would be one? ...My head hurts.

I honestly don't know what the origin of "man-hugs" is. I'm certainly not responsible for coining the term, but I have heard it and similar things said by a variety of sources.

I'm sure there's some vast tome out there somewhere that details its lurid origins in great detail, but I have yet to find it. I suspect there might be some manner of conspiracy trying to keep it a secret. When I asked a librarian about it, she looked at me like I was a crazy person.

Elliot's responding to praise in sort of way I usually respond to praise, which is somewhat awkwardly and along the lines of "I just did whatever I was supposed to be doing". The exception is whenever I pull off something bizarre or clever, in which case I won't exactly brag about it, but I will talk one's ear off about the finer details of how I pulled whatever it was off.

Maybe that is bragging? I'm not sure. Help me, interweb dictionary! ...What, I've gotta look up "boast" now? Guess that's why it's a web... here we go. Basically, it's speaking with exaggeration and excessive pride. I'm not so much saying how awesome something is, but rather enthusiastically saying what went into it, so that's not boasting. It's just annoying.