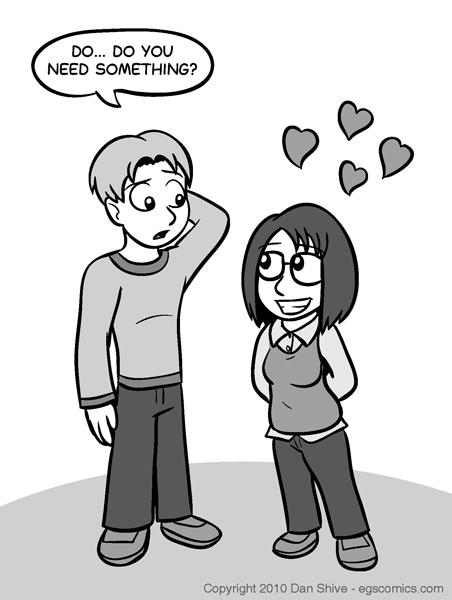 But seriously, how could I NOT have mild mannered Elliot be attracted to Justin? That would be like having a hang glider and not playing a guitar solo in the light of a full moon. It just wouldn't make SENSE.

...Huh. There's... not much to say about this one. It's pretty direct, really. Hate when that happens... OH! I can elaborate on Star Wars and parsecs!

Okay, so dig this. Apparently, a parsec can be used as a way to measure time, BUT! According to my inside source (some dude who e-mailed me), each parsec would be over three years. 12 parsecs would be over 36 years. Not much to brag about, there.

I have ALSO been informed via the wise council that is twitter that a lot of people in astronomy classes fail to grasp what a parsec actually is.

Prior to hearing this, I felt the most logical explanation for the 12 parsecs thing was that Lucas had his explanation from the DVD commentary in mind when writing the script (something about hyperspace), as he'd have to know what parsec meant if he included it. Yeah, people misuse words, but those words tend to pop up a lot. How often does "parsec" get misused in everyday conversation?

Given that he was making a movie about space wars and what-not, however, it's likely that he, or someone near him, had previously heard of parsecs and didn't really get what was meant by them. As such, I consider the most logical explanation to be a simple mix-up, with all modern explanations being retcons.

Not that I'm saying that's a horrible thing, mind you. Just look at EGS. You can't throw a rock without hitting a retcon, and several of them do exist as a result of past mistakes. I just point it out because people seem to want to hide that it was a mistake.

Oh, and there's also something in the script that people cite as evidence, namely direction that has Kenobi subtly react to Han's obvious misinformation. I think it's far more likely that Han embellishing his abilities was the misinformation, not the usage of parsecs.

I mean, seriously, we're talking about a universe where space travel is common. Parsecs should be common knowledge, and Luke was interested in piloting and joining the rebellion. He might have been a whiny farmboy, but I find it hard to believe that he wouldn't at least know the basics of what a parsec was, and given his whiny nature, he so would've called Han out on misusing the term.