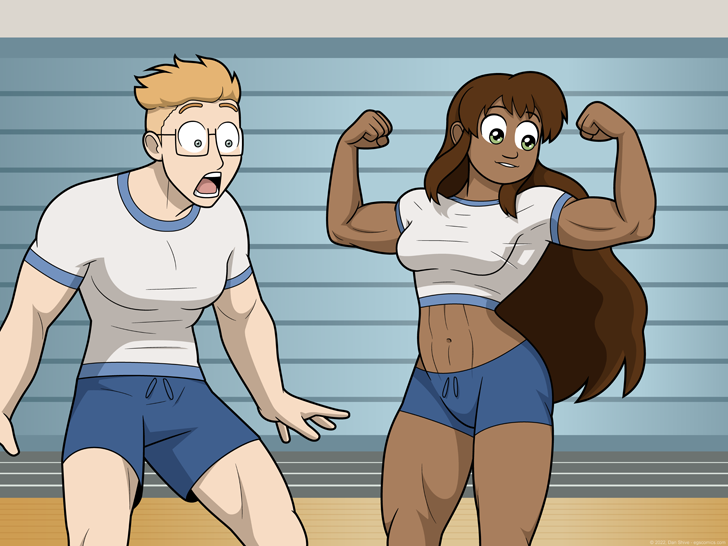 Grace thought the young man who was challenging her strength had every reason to feel confident. Grace knew that simply looking bigger and stronger didn’t mean much. Beyond the simple fact that show muscle was a thing, neither Grace nor Nanase looked exceptionally strong, but either one of them could lift this guy over their heads.

This did not mean he wasn’t strong, however, or that she was stronger. The natural flexing of his biceps as he moved his arms couldn’t be missed, and his pecs seemed to threaten violence upon the shirt that barely contained them.

As Grace considered this, she felt a bit deceptive. She was not being fair to herself, of course, as she was under no obligation to openly exhibit her strength. Nonetheless, she knew her newly declared rival might not have been so quick to challenge her if Grace’s outward appearance reflected her inner power.

Grace grinned as she got an idea! She couldn’t simply become more muscular without it being suspicious, her shapeshifting was a secret, but she had a clever plan to make her strength visible without giving anything away.

Facing her opponent, Grace informed him that she was stronger than she looked when she wasn’t flexing, and asked him if he would like to see her true strength. He laughed, and said sure.

Grace turned, lifted her arms, and flexed every muscle she could.

Her biceps ballooned. Her abs rippled. Her chest, shoulders and hips went wide and thick, and her thighs looked ready to crush boulders.

Her clothes, protected by her uryuom abilities, did not tear, but stretched. This could happen with rushed morphs, and she’d timed this one with the speed of flexing her biceps.

Grace looked around. Everyone, including her rival, were stunned, jaws agape. She smiled, thrilled her plan had worked.

Unbeknownst to Grace, however, it was abundantly clear to everyone that she was not simply flexing.

Not only was it obvious that these were brand new muscles, Grace’s skeletal structure had clearly changed. Shoulders do not miraculous become wider while flexing, nor do hands and feet grow, and Grace’s clearly had.

There was no question that this was some magical nonsense on display.

Grace, knowing that she had to sell the exertion such flexing would take, made a show of relaxing her muscles as she returned to normal. Her clothes looked wrinkly and oversized on her, but could still be worn without issue.

She asked her rival if he still wanted to challenge her. To her surprise, he enthusiastically said yes, and did so with a familiar look on his face.

It was the sort of look Grace got whenever she inadvertently did something people found attractive. She rarely knew what exactly she’d done to warrant that look, but she knew it when she saw it.

As she looked around, everyone else shared that look. Had she just charmed the entire gym?

Resigned to accepting the challenge of strength, Grace once again wondered how anyone had ever reached the conclusion that ninety percent of people were straight.