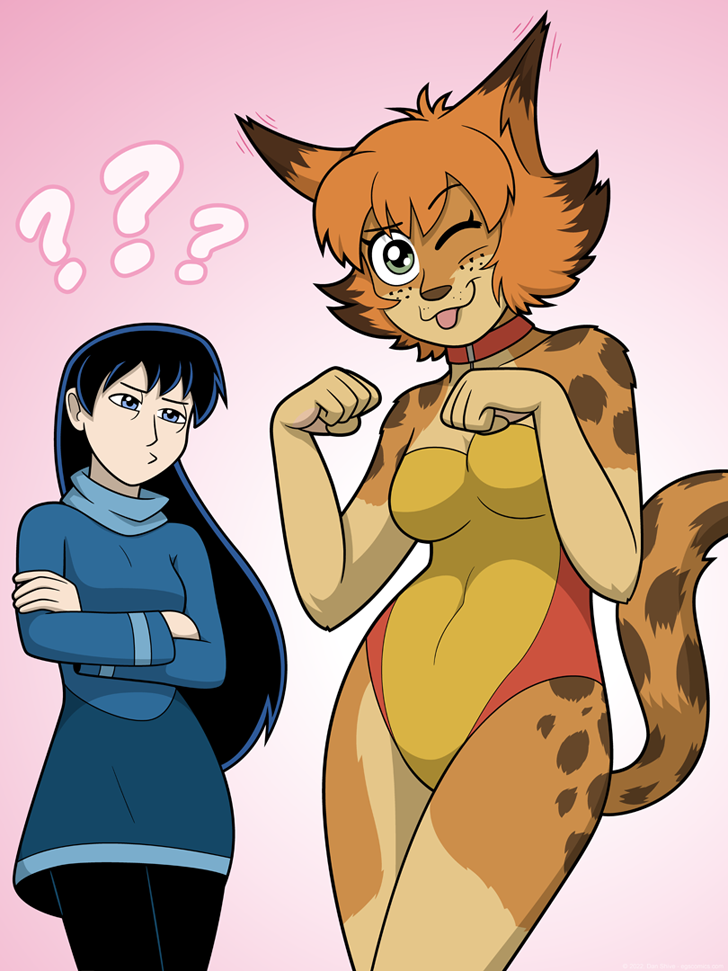 Just Not Sure - Susan and Catalina - HD at Patreon

Two stories below, but before those:

This CLAIMS to be a Sunday sketchbook, but it's sort of a Monday sketchbook? I didn't wait for it to be ACTUALLY Monday because it was already on Patreon in early February. I'm not sure why I didn't post it here sooner. Past me had some convoluted logic, and then felt busy and/or distracted? As I said, I'm not sure.

In any case, there'll also be a new sketchbook Wednesday.

Catalina was in a cat form. This much was obvious to Susan.

What was not obvious to Susan, however, was whether that proved Catalina had cat-themed magic. This was evidence in its favor, certainly, but there were other factors to consider.

For example, the collar Catalina was wearing. Susan believed a collar, if you weren't Rhoda, was an odd thing to wear. Odd things weren't automatically enchanted, but Susan couldn't just dismiss it.

What about the rest of Catalina's outfit, or the lack thereof? A shoulderless, one-piece swimsuit, she thought? What was cat-like about that? Absolutely nothing.

Susan had gotten off track with her thoughts on Catalina's clothes, as the point wasn't whether Catalina specifically had cat-magic. The point was whether she had magic at all.

Susan had gotten fixated on the question of whether Catalina specifically had cat-magic, however, and it would take her quite some time to get back on track. By then, she'd second-guess every observation she had made in this moment.

Catalina looked different. Susan was sure of it. She was wearing a collar, and what appeared to be a one-piece swimsuit. This change in outfit had happened very suddenly, too. Susan had only looked away from Catalina for a few seconds.

Susan wasn't sure how fast it normally took people to change clothes. When getting dressed for gym class, Susan was very fast, but she was also very focused on the task. She didn't dare devote any mental faculties to timing it. That would only slow her down.

Could she change in less than ten seconds? Maybe she could. She would never know.

Susan was pretty sure about that.

This, however, was also inconclusive. Determining whether it was just part of the swimsuit, or actually part of Catalina, would require closer inspection than Susan was capable of doing without getting flustered, making some unintelligible excuse, and hurriedly running away.

She would consider the movement of the tail evidence enough, but she knew fake cat ears that moved were a thing. Maybe fake moving tails existed, too?

Susan wanted to buy fake cat ears like that, but no one could know that.

Beyond Catalina's outfit and the tail, Susan didn't notice any difference whatsoever.