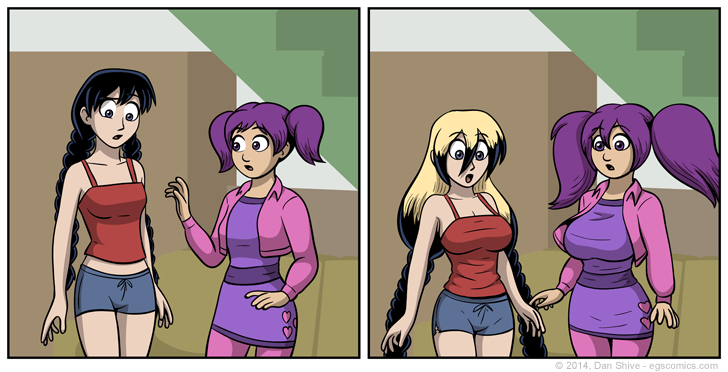 - Larger "before" panel
- Larger "after" panel

Requested by Jessi Masters - Susan with braided hair and the outfit from a previous awkward button comic and Tedd as the girly form from this comic in the before, followed by V5 though with Susan's hair acting like it was still naturally blonde

I decided that the basic narrative for this was Tedd somehow accidentally morphing herself and Susan with her new magic just before the, well, before image, and the effect somehow progressing with a V5 twist. It's not like this could just randomly happen in a non-canon request sketchbook! It has to kinda-sorta make sense in a vague way!

I wound up reusing the background from a previous reward sketchbook, which I originally wasn't going to do. I was working on a background that was another angle of Tedd's basement, and found it just didn't work as well as the one I had already made, so I flipped over a table and just went with the one that worked better. I hope this does not result in torches and pitchforks being pointed in my general direction.