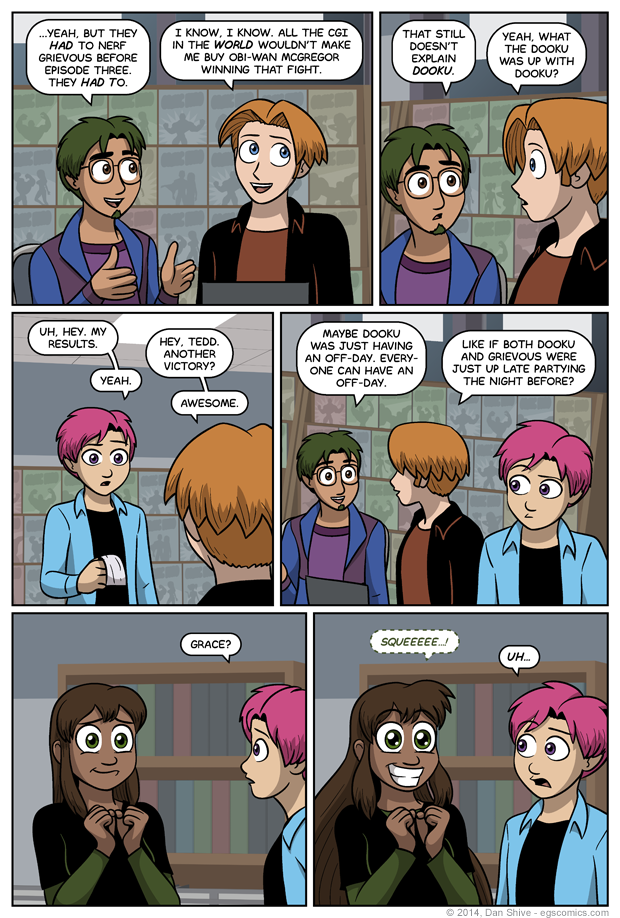 - "Oh, Dooku..."
- Luke choosing to talk with Justin
- The start of their Star Wars discussion

I had previously forgotten to reference Mr. Verres using Star Wars Vs. Star Trek as a psychological test, SO I'M DOING SO NOW.

This is yet another moment I wasn't certain I was going to show. I mean, yeah, we were definitely going to see more of Luke with Justin, and whatever's up with Grace, but I refer to this exact moment of Tedd turning in his results. I'd elaborate on why, but spoilers. Also, I'm sleepy.

In any case, the details of the Justin and Luke discussion is only important in terms of shared geekiness, but they're referring to Star Wars: Episode III and the original Clone Wars cartoons (the ones prior to the release of Episode III in theaters).

I did not personally watch those cartoons, so I had to do a bit of impromptu research to make certain what I supposedly knew about them was accurate. In particular, I wanted to make certain that Grievous genuinely was weakened in the cartoons in a way that was reflected in the movie, and that he was as skilled a fighter as various Star Wars fans have claimed.

The answers to these questions, respectively, are "yes", and "holy crap yes how did they even animate him oh my god".

And before anyone contacts me to ask, "Obi-Wan McGregor" is in reference to Obi Wan Kenobi and the actor who played him in the prequels, Ewan McGregor. Although, to be fair, I have trouble imagining Obi-Wan Guinness doing any better unless Obi-Wan Guinness didn't bother sword fighting and just used the force to fling Grevious off a cliff or something.