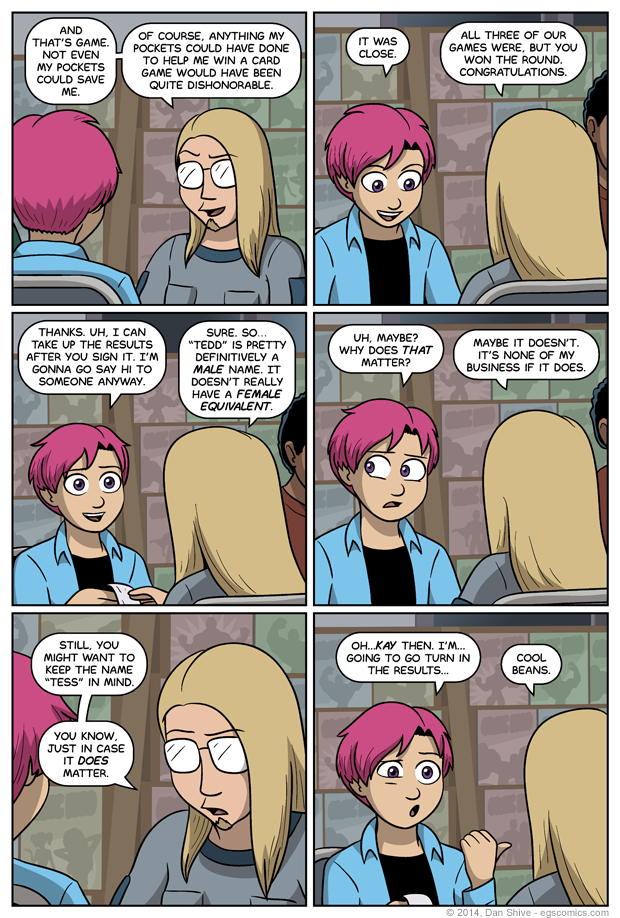 - The introduction of Sam, as he must now be known
- Opening packs of cards is serious business
- Sam's relevance is undermined
- Sam doesn't make mistakes
- When last we saw Tedd and Sam

After posting a comic such as this with various potential interpretations of the implications thereof, I know exactly what you, the inquisitive readers, would like to read about in the comic's commentary.

And THAT is an explanation of why Aludrakrala wasn't immune to the Cancel Spell card that is nearly identical to the explanation I posted on Tumblr the previous day with some extra clarification thrown in.

Aludrakrala's card states that he cannot be the target of spells, but he first has to successfully enter play to enjoy that protection. His summoning can be canceled regardless of that ability (the real world inspiration would be referred to as countering spells). Not being able to be canceled would be its own separate ability.

I know that is confusing, which is why I had Sarah emphasize that "not even Aludrakrala is protected from THAT." It was an acknowledgement of Aludrakrala's spell targeting immunity meant to imply that that protection didn't extend to protection from the Cancel Spell card.

Fun side note: Aludrakrala isn’t immune to Cancel Spell, but Stompalopes are. That’s what was meant by “the summoning of Stompalope cannot be stopped”.