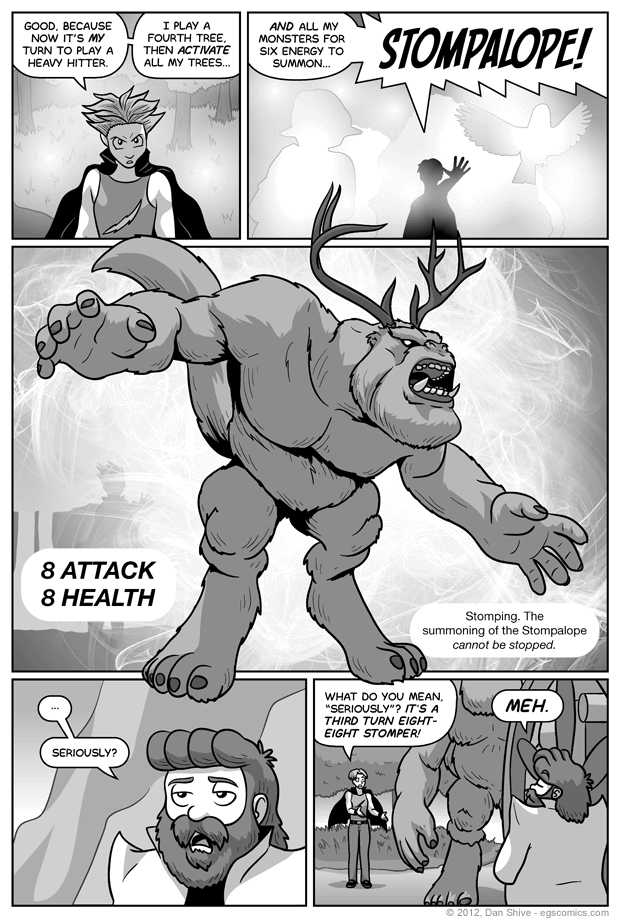 Posted September 18, 2012 at 1:00 am
His stomping cannot be unstomped. He is The Stompalope, and he will stomp you.

I originally referred to The Stompalope as "Stomprus" and intended to give it horns similar to that of a bull. I didn't like the look of the horns, however, and once antlers got involved, the beast named itself. I have more to say about the adorable critter, but it's best saved for later.

So instead, I'm going to talk about Justin's hair. His hairstyle is rather simple, and I know some people think it's unappealing in how basic it is, but I really like what can be done with it when wind and magic and such gets involved. It's difficult to do stuff like that with more complicated hair like Elliot's. It's not impossible, mind you, but I have to cheat it more than with Justin's hair.

It may not be fancy hair, but darn it, it's functional.

OH! So long as I'm bringing up Justin-related fashion, I occasionally get asked about what happened to his earring. If you forgot that he used to wear one, don't be ashamed. It's been a while, and the darn thing was so small that it was easy to miss and forget about.

In fact, I did forget to include it a lot, and that's one of the reasons it's gone. Another reason is that jewelry plus martial arts seem like an odd combination, and another is simply that I couldn't think of a good reason Justin would wear one that wasn't just a vague stereotype.

Granted, I'm not certain what would motivate one to get their ears pierced beyond going for a particular look. If someone made a compelling enough argument as to why they think Justin would want to wear an earring and I found myself agreeing, it's possible it could make a comeback.