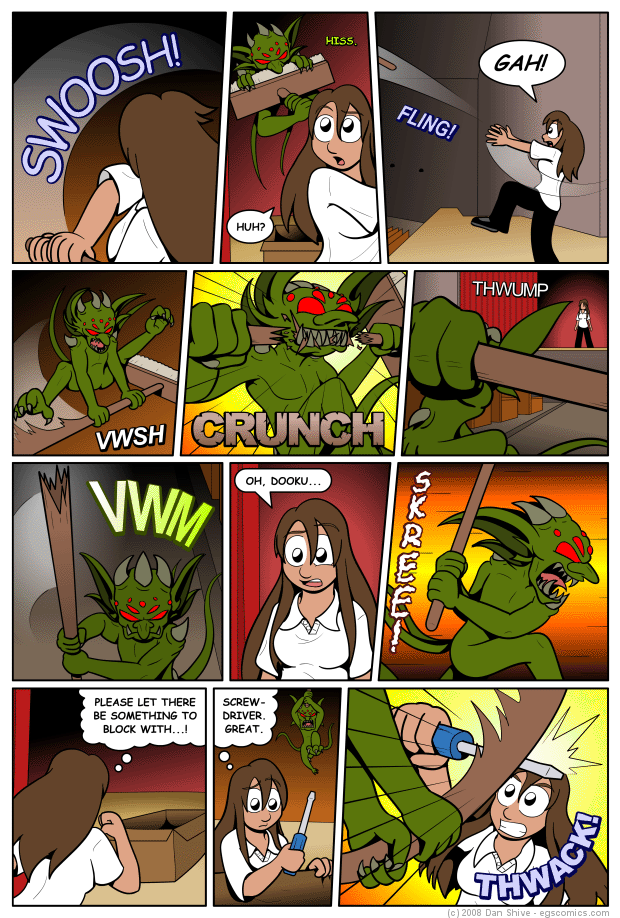 Posted July 30, 2008 at 1:00 am
I honestly believe this one page puts all previous EGS fight sequences to shame, though that's not saying much. I am proud of it. I don't doubt for a second that I'll look back at it years (months?) from now and cringe, but for now, it's a major accomplishment for me. ...I've been having a few of those lately. Yay self esteem boost!

Panels seven and eight are clear references to [[wp:Star Wars: Episode II]], assuming one has seen it. If you haven't and don't like spoilers, you may want to skip the rest of this paragraph. I'm not the first to point it out, but "Dooku" rhymes a bit with "poo poo", hence Elliot using it as an expletive. That, and if you're going to be filling the role of one of those characters, you don't want to get stuck in the role of Dooku. The sound effect in panel seven is a bit much, I know, but it amuses me, so THERE.

Ok, from this point on, no [[wp:Star Wars]] spoilers. ...Except that one character may be another character's father. Guess who!

One thing about fight scenes in comics is that dozens of pages can go by without advancing the plot. One of the key reasons for this is that action often calls for lots of panels, and there often aren't more panels per page for the fights. For online comics that update gradually, this can be brutal.

And that's why this comic is twelve frickin' panels long. I could have made it nine, but I feel the current last panel is a much more satisfying panel to end on. It's as much a cliffhanger as panel nine would have been, but it has the Bloodgrem right on top of Elliot, which means the next comic doesn't have to deal with that buildup, and the story can move along faster.

Truth be told, this comic could have benefitted from a thirteenth panel, as the broken broom was clearly flipped at some point between panels five and seven. The splintered end would be down, otherwise. Then again, I've been told the number thirteen is unlucky, and this comic took a ridiculously long time to make as it was. Not only is the Bloodgrem complicated to ink, but action poses are complicated to draw, and I think I sketched about five versions of panel seven before I decided on that one.