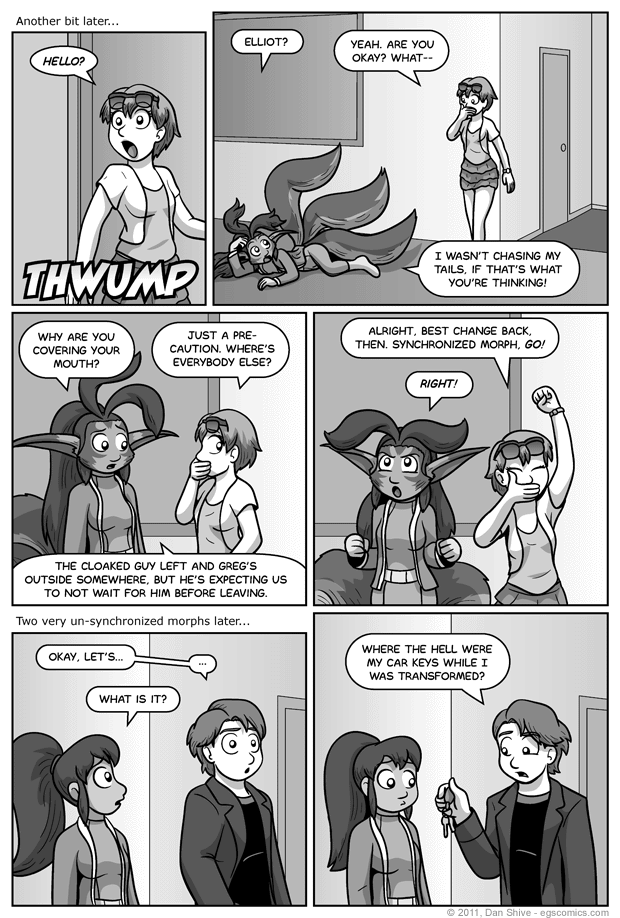 What about the keys?!

That one line basically sums up why it took so long for clothing transformations to make it into the actual story for this comic. It's that sort of minor detail that bugged me to the point where I went out of my way to avoid it being an issue.

In the end, however, magic and transformation and stuff in comics is just more fun when played fast and loose, and being able to do that is more important than losing sleep over where the contents of people's pockets wound up. That doesn't mean, however, that I'm not going to poke fun at that mystery.

It's also something I'm never likely to give a real canon explanation for, either, as it's pretty obvious where they'd go: a pocket dimension!

What? Okay, yeah, it's a pun, but it's still the most reasonable explanation given the context.

I like this comic. Really, I do. Considering how little actually happens in it, however, you might be shocked to learn that it was originally two comics with essentially the same amount of material. So... yeah. This comic, stretched out over two pages. If anyone was wondering why the dates on the comics at this point in the archives wound up jumping from Wednesday to Friday, that's the primary reason why. Yaaaaay rewrites... whoo...