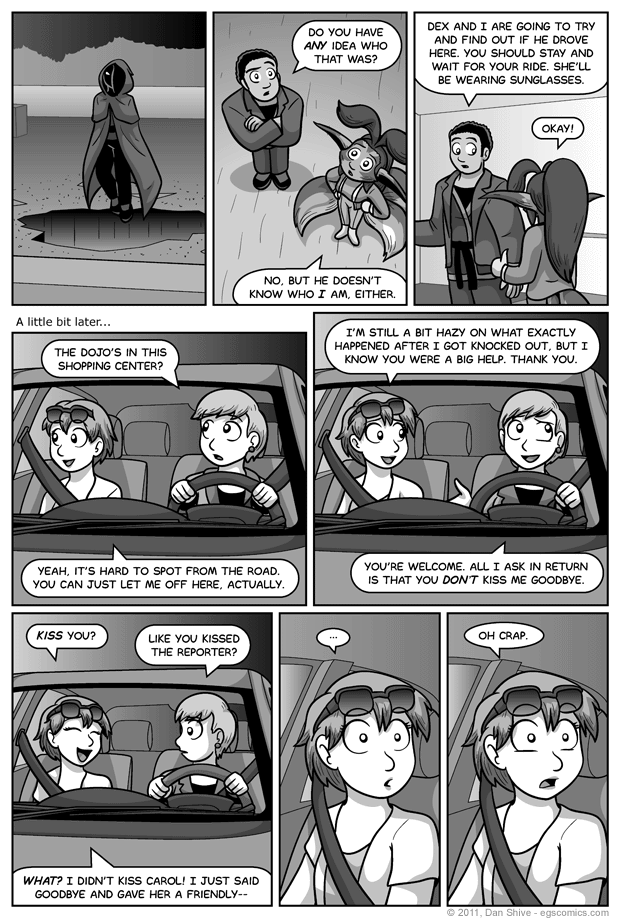 This comic was nerve-wrecking to write. Well, not so much this final product, but figuring out what to include and what not to include in the course of having things proceed in a manner that makes sense without getting bogged down with details. We almost wound up with an entire comic devoted to establishing what order they were going to leave the dojo in and why. Do I even have to elaborate on the horribleness of that?

Speaking of nerve-wrecking to write, I find myself without much to say about this comic. Noah leaves like he said he would, it's established that Greg and Dex are going outside the dojo, and Elliot realizes something we all already knew. I like this comic, but there's just not much for me to say about it.

Unless... okay, stay with me on this one. What if Noah was an aardvark? You know, an ant-eating mammal from Africa. And I don't mean like a half-aardvark like Grace is a "half"-squirrel, I just mean an aardvark. With a cloak. Who can use magic, and talk, and...

You know what? No. That's a horrible idea. An aard...? No. No no no. That's it. I'm not forcing this commentary. Enjoy freaked out Elliot / Heidi. Goodnight!