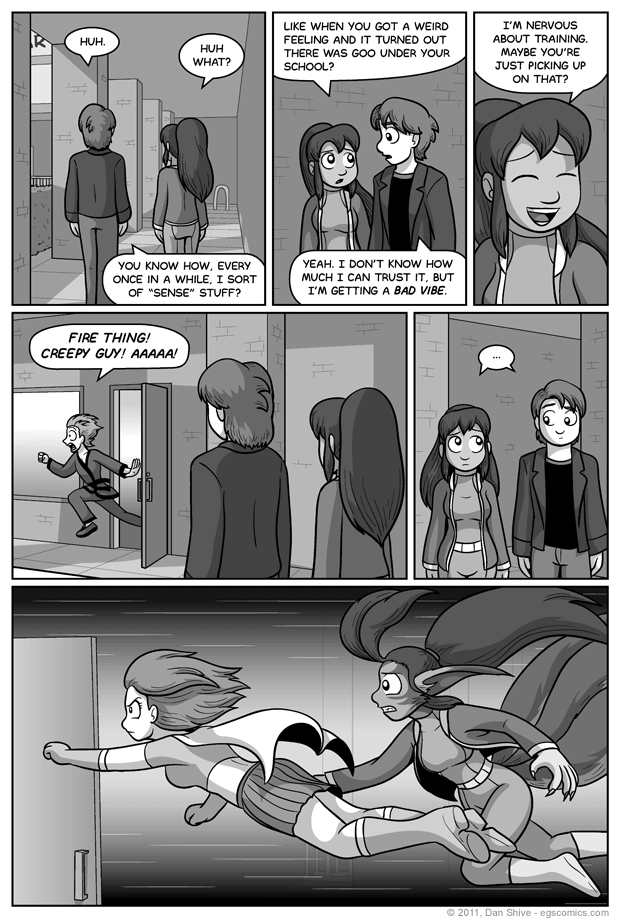 And now, a glimpse at part of the finely-tuned and professional script for this comic!

...This is what happens when someone is writing a script that nobody else has to work from.

It might not be that easy to tell in greyscale, but this is the first time Elliot has turned into Cheerleadra while trying to look somewhat less like Ellen, and "her" hair is a bit lighter as a result (roughly 10% brighter, to be roughly exact). The face is also a little different, but we'll get a better look at it shortly.

Of course, a fantasy version of this less Ellen-esque Cheerleadra was seen previously in a fantasy panel while Justin and Susan discussed what to tell George. We'll see how close that fantasy was once this version of Cheerleadra turns around and the bad-ass wind effects let up.

Elliot and Ellen's ability to sense things has been fairly inconsistent in the comic's history. One might think this is because it was an early story idea that became problematic later on, but no! I'm totally going somewhere with the fact that it's unreliable! See? Elliot said he doesn't know how reliable it is. It's clearly sporadic by design and was totally always intended to be.

With Elliot and Ellen, they just sort of sense stuff when [s]it's convenient for the plot[/s] the circumstances are right. Greg, on the other hand, seems to have greater skill with sensing things, though for all the plot has shown, he might just be good at sensing relative power when making a conscious effort to do so.

Sensing goo instead of you

Grace references Elliot sensing that the goo was under the school in this comic, but she must have been told about that after the fact, because she wasn't there when Elliot sensed that. It isn't that hard to believe they'd talk about that one time a giant goo monster attacked the school from time to time, but as the first provided link shows, Grace could have used herself as an example.

Why didn't she use herself as the example? Darned if I know. I can think of half a dozen possible reasons, but you'd have to ask her to be certain. I just write this stuff.