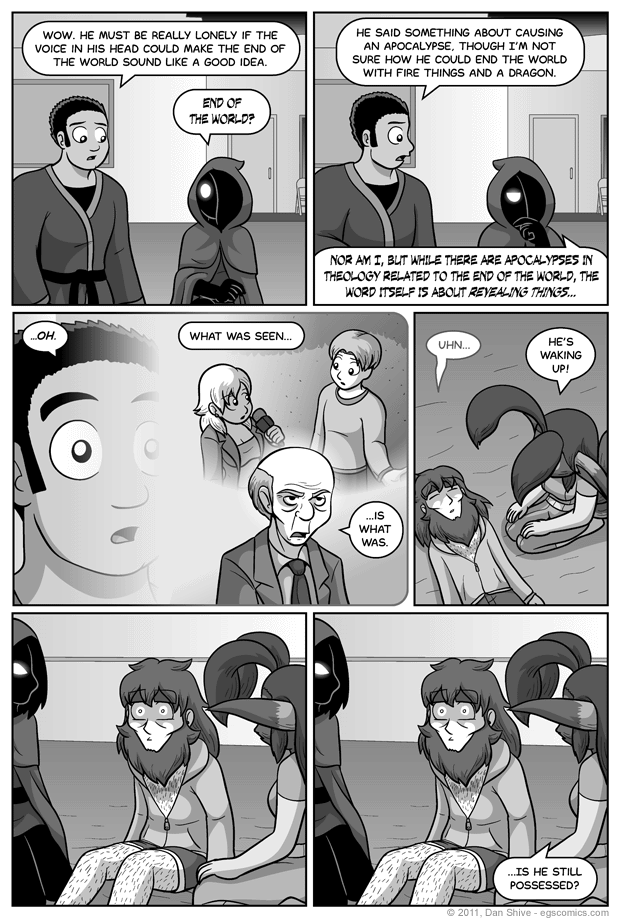 Shortly after the "I bring an apocalypse" comic (within the hour of it being posted, I think), I received a tweet informing me that an apocalypse was nothing to be afraid of, as it was merely a revelation. IT TOOK ALL OF MY WILLPOWER to not tweet back "yes, and what has happened as a result of Dex's summonings so far?"

Seriously. All of my will power. I typed up several different replies of various levels of hinting and winking and wound up not sending any of them. It was maddening, but I had a responsibility to not spill those particular beans.

This comic was pretty simple to draw, what with re-used imagery and what-not, and yet I somehow managed to make it technically complicated. Panel 3 was a puzzle of layers and gradients and voodoo to get all of it to look right, and yet the end result is so simple.

The next time something winds up being complicated, I'm going to make sure the end result looks complicated, too. Maybe I'll throw in CGI dinosaurs or something. Those look complicated enough, though I refuse to give them historically accurate feathers. I don't care what those fancy-pants scientists say with their science. Jurassic Park was 100% accurate, darn it!*

* The Dan who has made this assertion is well aware that Jurassic Park was full of inaccuracies, including but not limited to the several liberties taken with the velociraptors. There is no need to contact him about this. Now would be a good time to send him questions for the next Q&A, however.