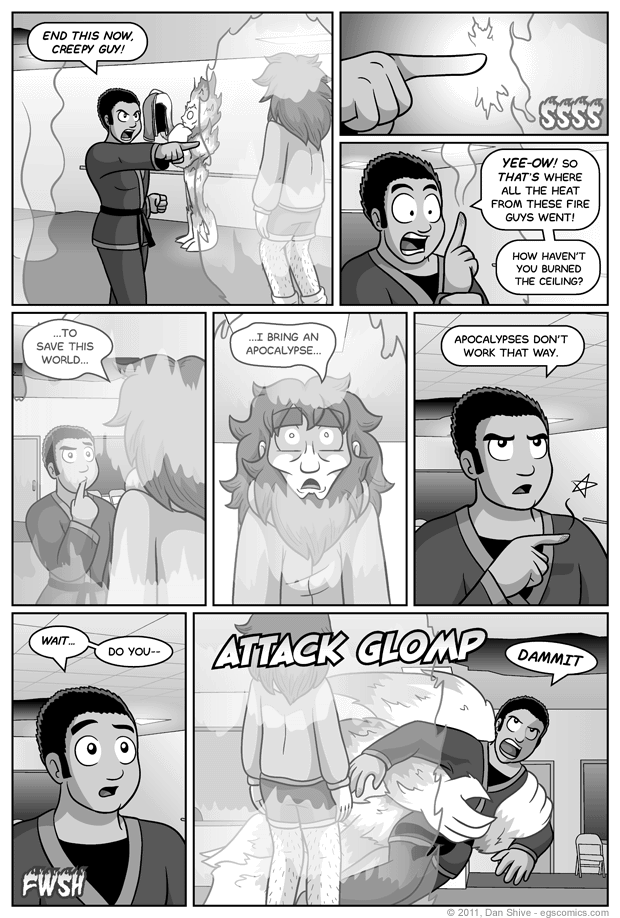 Posted May 3, 2011 at 1:00 am
For those of you who weren't here Monday, no, I haven't once again changed the comic's update schedule. I'm still going for updating every weekday whenever possible. There was, however, an incident that resulted in the lack of a story comic on Monday (details in the commentary of the linked sketchbook). Short of additional disasters, there will be four story comics this week.

And for those of you from the future who are reading this in the archives and have no idea what I'm talking about, I just want to wish you good luck in stopping the robot uprising! If, however, the robots have already taken over and humanity has been downgraded to rebel status, please slap whoever dropped the ball for me.

Heat does not work that way!

Nine years ago, I probably would have given a detailed quasi-explanation as to how Dex's heat shield wasn't burning the ceiling given the heat and that whole "heat rises" dealie the cool physicists like to talk about. Nowadays, I give a character expressing the same confusion. Odds are there WON'T be any further explanation.

Unless it turns out I'm lying and they wind up going with a techno-babble solution that's dependent on the heat defying physics, but I don't see Geordi anywhere, so we're probably safe.

Punctuation does not work that way!

That's not a typo in panel eight. Well, it IS, but it's intentional. For whatever reason, the lack of punctuation amused me.

Vapor does not work that way!

Greg's clearly been vanquishing fire dudes, but it hasn't been convenient for the pacing to show them getting hit, then going away, then having Bones say "they're dead, Jim".

Vanquishing of said fire dudes is what I was attempting to imply with those vapors in panel one (similar to the steam from before), but if that wasn't clear until just now reading this, well, that sucks, but hopefully you then assumed it implied the dojo was built over some geysers. If enough people assumed that, I can end this sequence in a pretty awesome way.

Morbo does not work that way!

If panel six instantly reminded you of Futurama and windmills, you just might be a geek. For non-Futurama fans, just picture a news monster loudly asserting that windmills will fail to keep turtles cool. There you go.