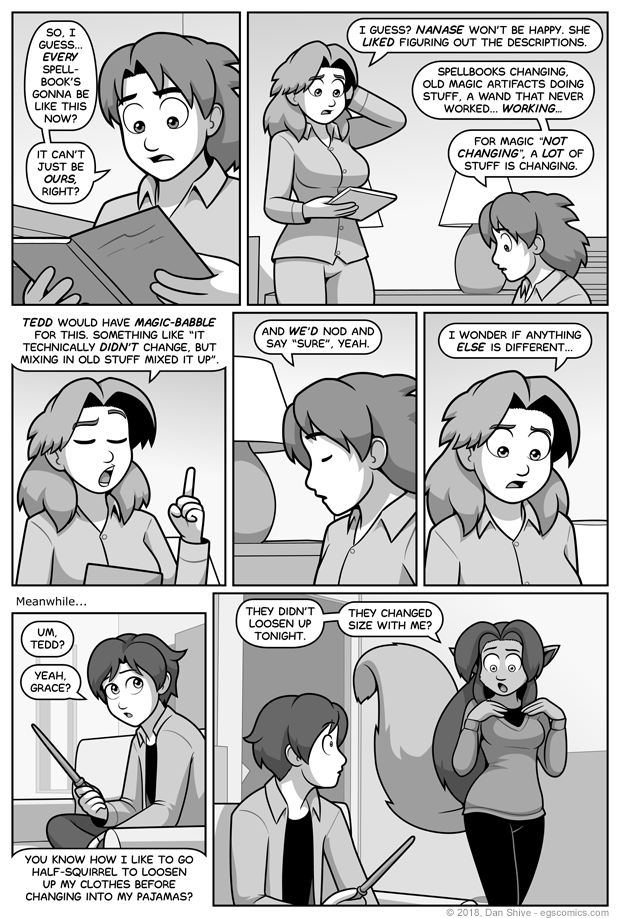 Posted July 4, 2018 at 3:46 am
FINALLY. I'm not judging anyone who enjoys some fictional transformation wardrobe... "complications" (least of all because it would be hypocritical as all heck), but I've wanted Grace to be able to transform her clothes with her for a while now. There's so much more freedom to have her do things when that's not an issue.

I wasn't willing to just have it happen for some random or contrived reason, however, so I waited for the infinite will of magic to change how the universe works.

Anyway, this probably has a bunch of other implications, but whatevs. What's IMPORTANT is Grace can go half-squirrel without worrying about what pants she's wearing.

I was considering who might actually prefer the old spellbooks, and it occurred to me was that Nanase never really seemed to have that much trouble with deciphering the spellbooks. She would get a spell, and she'd mostly be able to tell what the deal was.

Combined with the thought that she'd help Ellen with her spellbook, and I concluded that Nanase would be someone who was fine with the spellbooks as they were, and would like having all that information.

Speaking of Nanase, someone asked me what language her spellbook would be in. The question hit me like a ton of bricks, as it got me to thinking about what language Nanase would actually think in.

Nanase grew up speaking English and Japanese. Japanese is favored at home with her family, but English is used almost everywhere else in social and educational situations.

Ultimately, however, I'm not equipped to reach a conclusion. I grew up with one language. I've no idea what it's like to grow up with two, and under those circumstances. The only honest answer I can give on my own is "I don't know".

That said, the spellbook wouldn't necessarily mirror the language she thinks in. It might also go with a logic like "she knows Japanese, and lives in a primarily English speaking area. One goal is to hide what the book is, so Japanese".

I can logic up all sorts of excuses for why the spellbook would be one or the other, but I'm not decided on that yet, either.