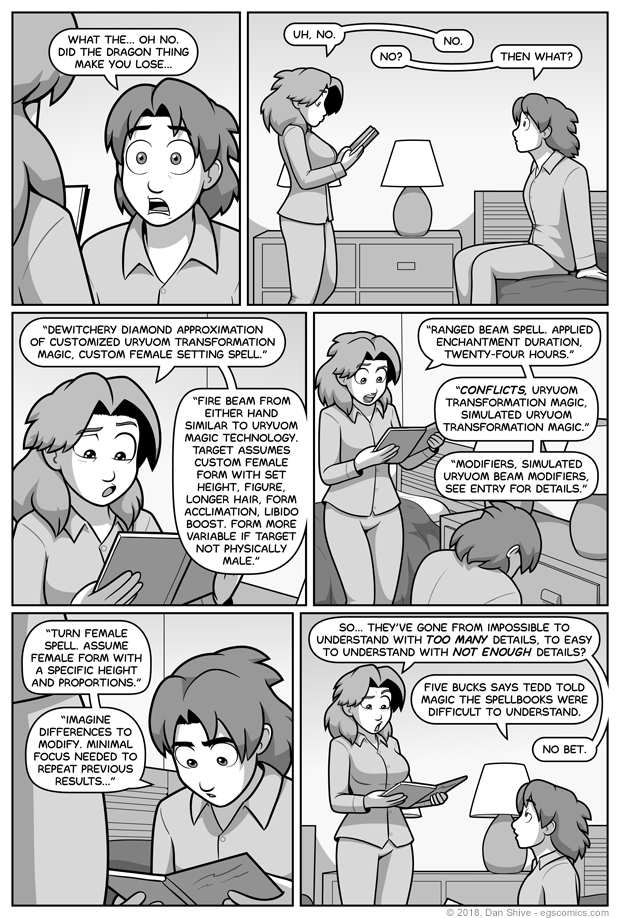 Posted July 2, 2018 at 1:00 am
BEWARE. I LIVE! (I took a week off for health reasons, mostly having to do with my back. Many thanks to everyone for their patience and well wishes during that time!)

- "The spellbooks are difficult to understand?"
- Elliot and Ellen know at least some of what happened with Tedd and Magic (Mentioned talking over the phone with Nanase, and then there was further recapping with Arthur)

Admittedly, it would be funnier if the descriptions were even more abridged, such as "become a girl" being all there was for Elliot's spell. I had to consider the long term, however, and a better joke now would mean spell descriptions I'm not happy with later.

That said, the spell books are delightfully unspecific. It might seem like there's a lot of information about Ellen's spell, but "set height", for example, could literally mean any possible height. Maybe even physically impossible heights for a human, for that matter. This IS magic we're talking about.

Also thinking long term, I like the "conflicts" part. It gives at least some indication of what cancels out what, which is useful when considering that some enchantments don't cancel each other out and can stack.

Ultimately, I like this middle ground of "vague, but helpful". Also, I could never, EVER show a full description of the incomprehensible version of the books, and that's been a thing for long enough. It'll be nice to actually be able to show what's in some of these books.