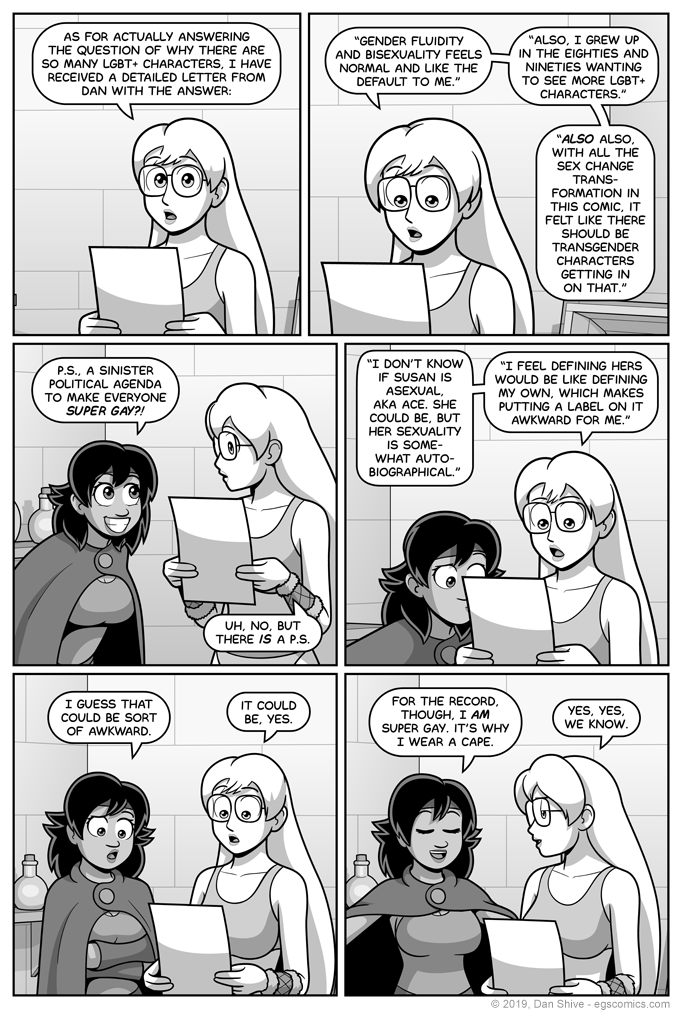 The letter was going to be comically brief to the point of earning a "that's it?" reaction, but it turned out I actually had a decent amount to say. Go figure.

Seriously, I find aversion to the idea of changing genders weird. It's just something I accept a lot of people wouldn't want to do without really getting it myself.

The whole "eighties and nineties" thing is pretty significant. It was like living in a drought, and the water you could find was often of questionable quality.

As for trans people "getting in on" transformation, it sort of reached the point for me where it just felt weird not to address that. It also seemed natural to make that one of the reasons for wanting to make magic accessible to everyone, and to put an end once and for all to Tedd overcompensating and have him brace being genderfluid.

Which, incidentally, I was terrified of doing. I did not expect anything close to the amount of positive feedback I got after that. I was way more used to criticism, and was mostly expecting more of that. The positive feedback was a pleasant surprise after all the anxiety that lead up to it.

My sinister agenda is I'm writing characters and stories I want to write.

When I first introduced Susan finding people and scenarios attractive while lacking desire to be an active participant in said scenarios, I wasn't thinking "well, here's another demographic to check off on this checklist I OBVIOUSLY have and am just trying to complete".

I was thinking "this is sort of how I am, I've never seen it in fiction, it seems appropriate for Susan, here we go". Since then, I've gotten a lot of questions about Susan being Ace.

My general response has been "uhhhh I dunno? I didn't even know this general description was in the spectrum? Maybe she'll find herself wanting to be do 'things' with someone someday? Maybe not? I don't really want to attach a label I might go back on later. Also there's a personal aspect."

I apologize to everyone who finds this answer disappointing, but it is how I honestly feel about it.