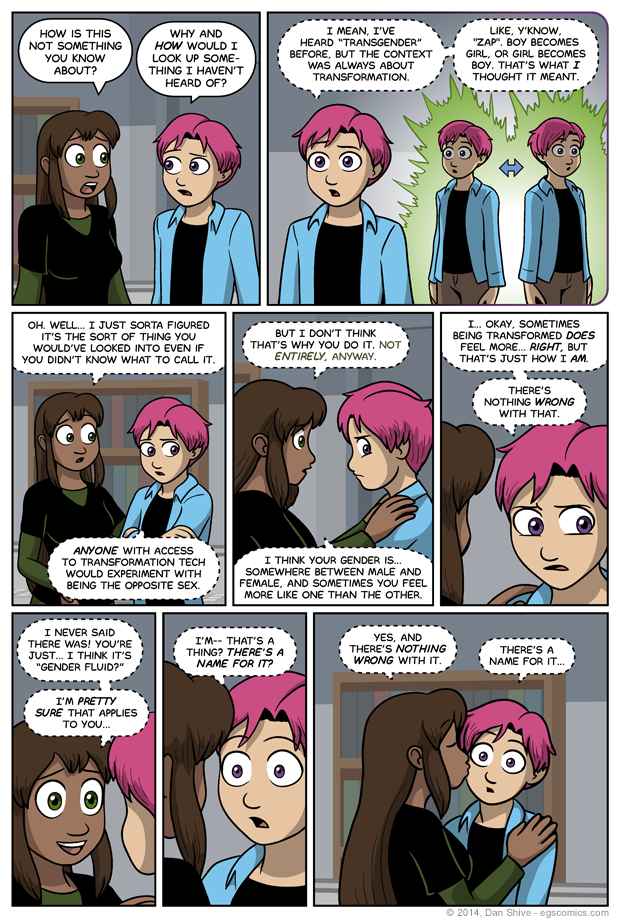 I swear on all that I care about that the one of the fantasy Tedd's is male and the other is female. The clothing is just really good at hiding the curves on whichever one is the female Tedd.

Several people have asked the same question as Grace in panel one, and I'm just gonna say it: It's incredibly easy for people to not have heard of something. Tedd's life experience has been different from yours. Transgender issues rarely get addressed with any sort of depth in popular media, and even if they had, there's no reason to assume Tedd's heard of it.

We no longer live in a world where there are just a few major TV networks and a few movies coming out. There is a TON of stuff to distract us out there, and even if something is a big popular thing (let alone an issue that rarely gets coverage), you're going to meet people who don't know anything about it.

Case in point: Make a Lost joke about a specific character from the show in my presence. Go ahead. I WILL HAVE NO IDEA IDEA WHAT YOU'RE TALKING ABOUT.

Meanwhile, Tedd? Yeah, he's a nerdy guy who likes nerdy stuff, but how many hours are there in the day? What all has been going on in his life? What does he do with his free time? Who was the one guy he hung out with regularly up until the past year (you should know this but ELLIOT!)? Is that something they were likely to have talked about?

In short: It's super easy to not be aware of such a thing, and the more people who assume you already a person already knows, the less likely it's going to be pointed out to them.