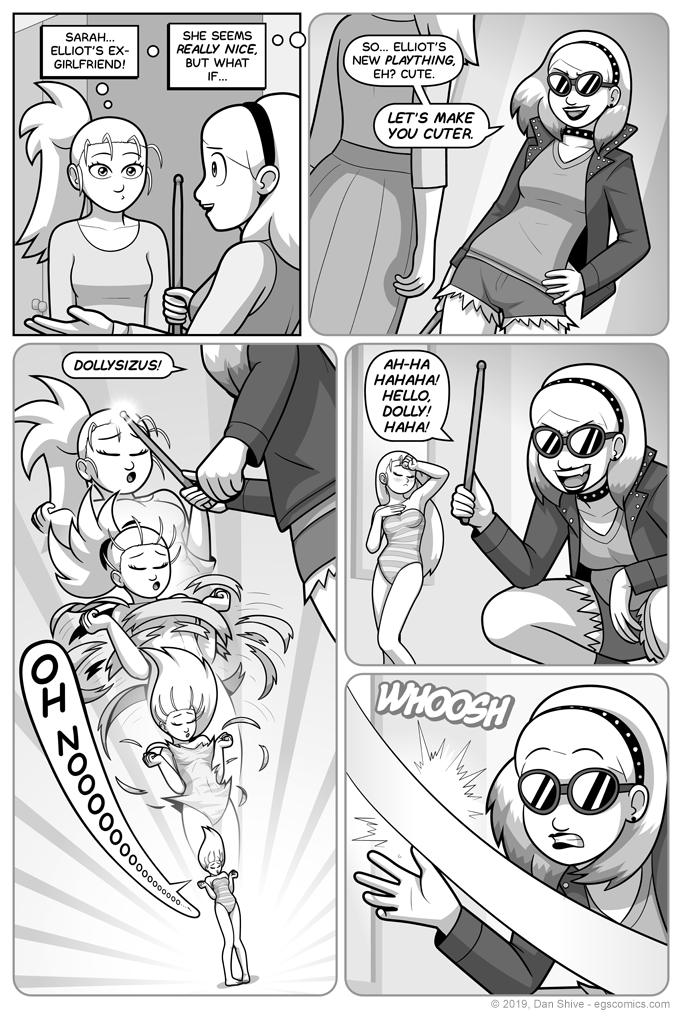 I didn't want Ashley to simply shrink in this fantasy, and I also wanted her to wind up still, well, covered up while still having an element of embarrassment fitting Ashley's imagination. There were also other elements I can't elaborate on yet I was concerned with.

This is one of those things where the answers seem obvious in retrospect, but elusive and "I don't know what to do, should I even have this sequence if it's just shrinking" while trying to figure it out.

The obvious answer was, of course, the magical girl transformation approach in which there's a stage in the process that raises eyebrows. Also, give her slightly doll-like proportions with longer legs, and a "swimsuit" with a visible thickness to it reminiscent of the very first Barbie doll, because OBVIOUSLY.

Also some other other important details, but again, commentary on those will have to wait.

Speaking of the first Barbie doll, to more closely resemble it, "doll" Ashley's swimsuit would need to be black and white, which I originally intended as a reference for people to spot. It might have worked with Ashley's normal hair, but with it light (I imagine it matches Diane's hair), I felt the contrast was too strong, hence the low contrast grey stripes.

Another sort-of reference on this page is that I needed reference for someone sitting similar to Sarah in the last two panels. The easiest to search for I could think of was the Pokemon trainer Guzma from Pokemon Sun and Moon. That beautiful trash punk squats while in battle, and I was spared having to try and figure out the pose by sitting that way myself thanks to him.

My knees salute you, Guzma. Thank you.