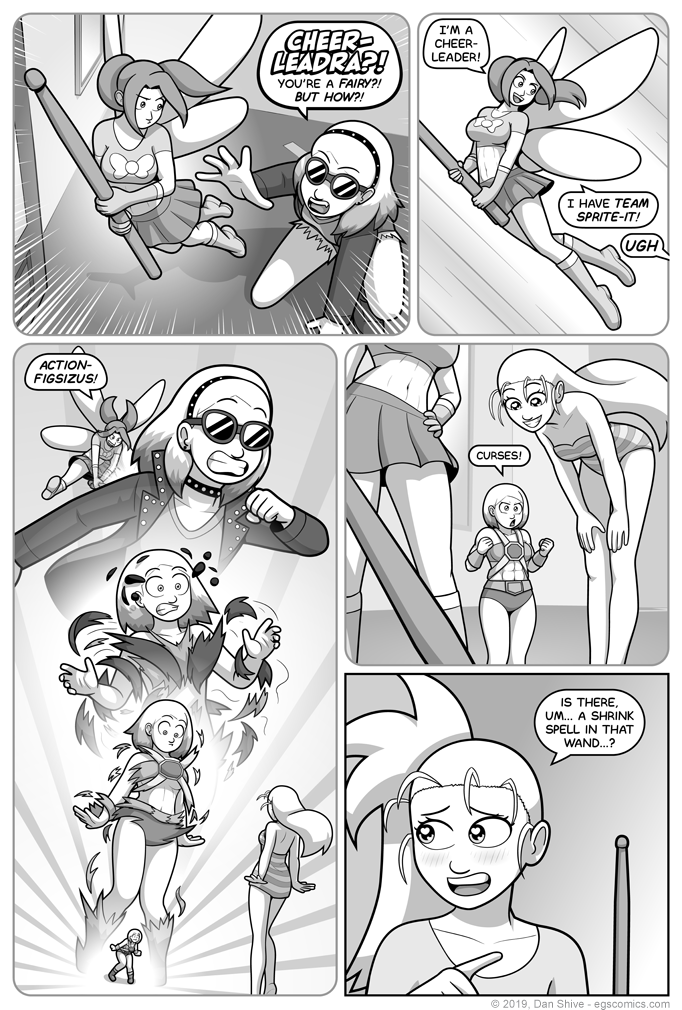 Everyone cool with the next dozen pages just being four super easy panels each with one character per panel being shown from the chest up at most? Yeah? Cool. Cool cool cool.

I originally thought I could get this fantasy done in a single page, but then I originally imagined normal Cheerleadra just swooping in and shrinking Sarah, and that would literally be just two panels.

I mean, if I had two enormous panels, I could have made it work, but in the space I'd given myself? It was a terrible idea.

I'd like to say realizing that was why I made it two pages, but really, the initial decision was because I really liked the one panel shrink sequence in the previous comic and wanted to do a second one. I see myself doing similar panels in the future in order to keep up pacing while still allowing multi-stage transformation sequences.

This second shrink sequence was technically easier than the first, as I knew better how to handle the layering and such, but I found it difficult to settle on a final design for "action figure" Sarah. I knew I wanted a He-Man vibe, but it took a while to figure it all out. Ultimately, stockier proportions, abs for days, that... whatever that chest gear is, and shorter hair (because action figure hair) won the day.

Fairy Cheerleadra is biggest because I didn't want any of them to be the same size in the end, and I wanted her to believably be able to swing the drumstick wand around (less a matter of mass, and more just having the hands for it, really).