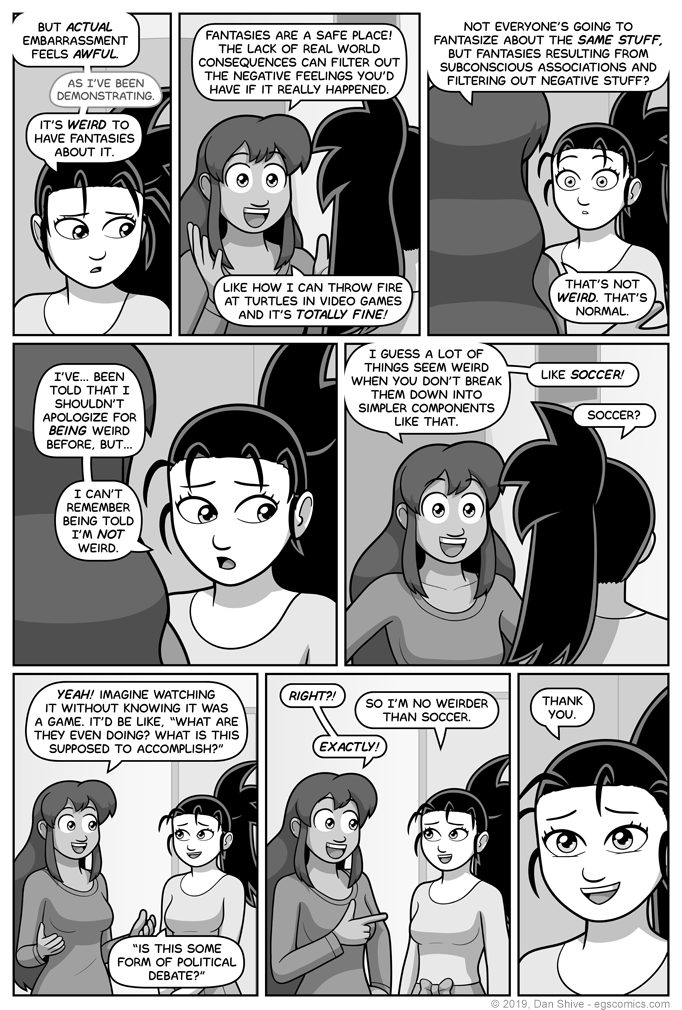 - Liz being supportive, but still suggesting Ashley is weird

Y'all know you want presidential debates on soccer fields with VP candidates as goalies.

There's a lot I was tempted to have Grace elaborate on, but there are only so many panels and so much reader patience. In the process of cutting stuff, though, we lost Grace pointing out it can be a problem if someone doesn't know the difference between fantasy and reality, and pointing Ashley clearly does know, so huzzah.

I don't consider it a big loss, as that's a point that's been brought up before in this comic, and will undoubtedly be brought up again. I just wanted it on record that, yes, I am aware that what Grace is saying plus not being able to tell the difference between fantasy and reality would be a problem.

(Though, really, pretty much anything plus "unable to tell fantasy from reality" is going to be a problem.)

I was originally thinking of bringing up American Football, because I imagine that would be one of the stranger sports to watch without context. A bunch of big, armored men, line up, stuff is said, there's a flurry of activity, someone gets tackled, etc.

But then I realized two things:

1 - Grace thinks American Football is weird even with context due to the injury factor. It would be out of character for her to not note that, which sort of undermines what she's saying (even if Ashley could just say "I'm not as weird as Football" instead).

2 - Comparing it to the sport Grace knows Ashley has played is just better.

That, and soccer would be pretty strange to watch without any context, too. I also considered baseball, because I like baseball, and there have been a number of "thinking about baseball" jokes, but baseball is pretty slowly paced. Still strange without context, but I don't think it works as well.