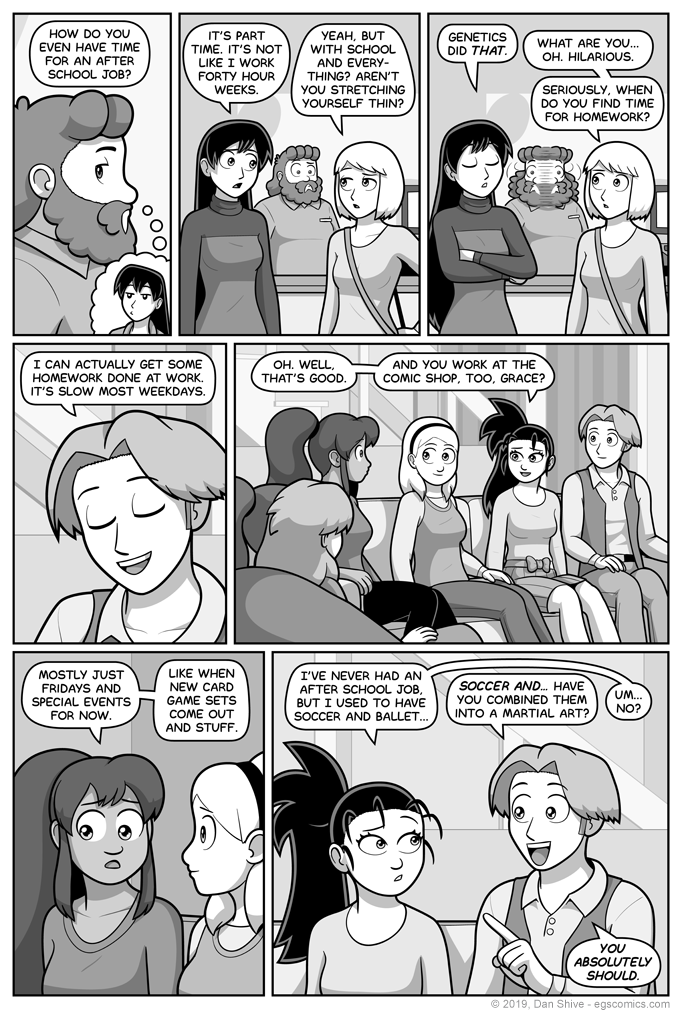 For the record, Nanase and Ellen are on a bean bag chair. Or something in the style of one. I have a "bean bag chair" that is entirely "bean" free while also barely being a chair.

There will be other bean bag chairs, too. There was nearly panel space devoted to Elliot saying anyone with one had brought theirs over so there'd be places for everyone to sit, and that so nobody would panic over the idea of the Verres household having so many bean bag chairs.

That said, I decided that was a minor detail we could skip, BUT PLEASE DON'T PANIC!

Get to the sofa!

I had a writer's block problem in this scene in that I wanted to transition to Ashley getting to know people on the sofa, but transitioning from Ashley to Ashley without a scene change can be awkward even with "time has passed narration".

(I'm now convinced this is half the reason sitcoms have B-plots).

The obvious solution was to shift to someone else for a comic, but everyone at the party were in the same spot talking to each other, and I didn't have anything worth a full page for Susan and Diane yet.

I eventually realized I could do something I have often seen on the TV show Archer in which a character says something that could also be said in a separate conversation, and then cut to that other conversation. This let me show what Susan and Diane were up to while also getting Ashley on that gosh darn sofa and getting to know everyone.

The technique stood out to me if for no other reason than "half hour" TV shows can be as few as twenty minutes these days (with credits), and they found a way to link and overlap conversations in comedic ways that also allow more to happen in an episode.

Granted, I've no idea if that's been done before. I have to imagine it has, but I'm the wrong person to ask. I don't watch a lot of TV. Either way, their execution of it has been masterful.

And yes, even I'm surprised I enjoy Archer. I usually run away from shows in which everyone's a jerk, but I can apparently enjoy myself if it's a cartoon and H. Jon Benjamin is involved.