Grace, I love you, but this is just one of many reasons why we're following Susan's misadventures this time around.

And yes, there were guns in the Fable games (starting with Fable 2). They were, of course, generally weaker than melee weapons, because that's how logic works.

Omg I had so much fun you guys

I had a lot of fun making this comic, and I must confess that part of it was getting sidetracked to work on designs for later in the storyline, and putting way too much work into the beetles.

By which I mean I used basic shapes to make virtual beetles for reference. 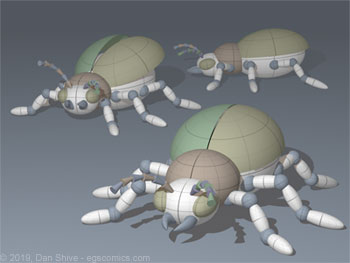 I applied a morph to the pincers, but even those were just cone shapes. The shell part housing the wings (I am not a beetle expert) are just spheres with textures that hide everything but the part I wanted visible.

It was completely unnecessary, but I found it ridiculously fun and satisfying, SO I REGRET NOTHING...!

Anyway, that's why there'll be approximately ten billion beetles in this storyline now.