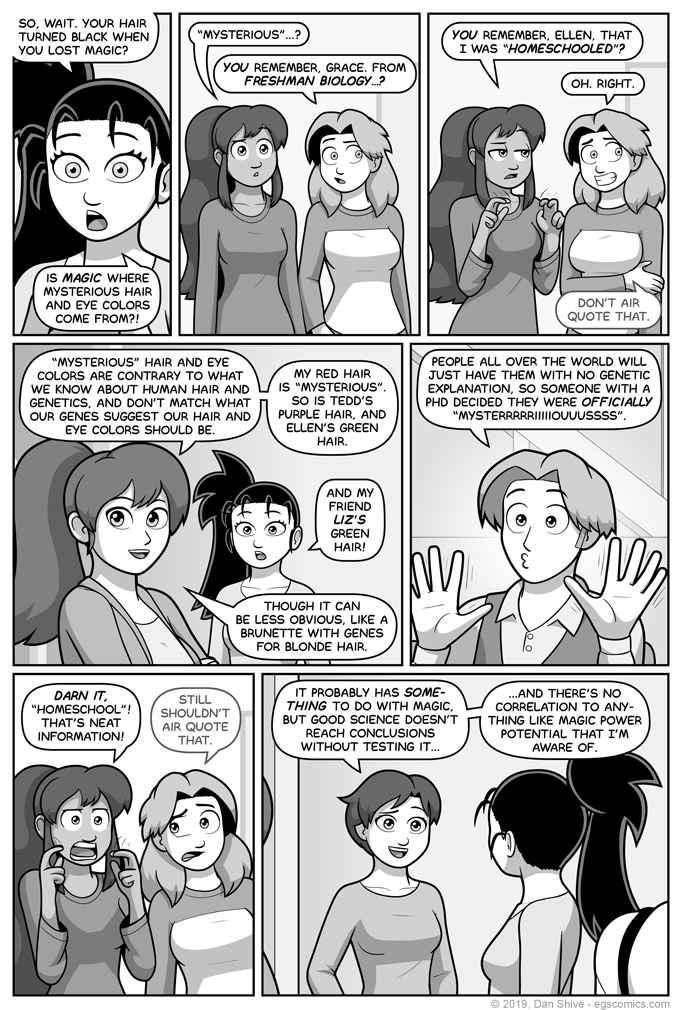 I did a bit of experimentation with how I drew parts of this page! And I can't tell the difference on the final result except where I had to fix it because it didn't look how I wanted.

I consider this less an explanation for the odd hair and eye colors and more an acknowledgement that they exist and don't seem to make much sense.

Which is good, because that's exactly what I wanted (which is probably why I did it).

In the history of the comic, people have been given "mysterious" hair and eye colors on whims (or, very early on, because I was terrible at drawing black hair). Any explanation I gave now would have to be convoluted as heck to somehow consistently add up, and it would create rules I'd have to adhere to when designing future characters.

I do not want that. It'd be a mess. The hair and eye color nonsense has been acknowledged, but not explained.

I do think it's neat to consider the societal impact this sort of thing would have, however. I mean, first obvious thing is obvious: There'd be some different biology lessons.

But there's also things like how exotic hair colors with no explanation may have been interpreted in certain cultures, possible myths that might have resulted from this being a thing, prejudices that may exist (especially with the conclusion reached by scientists being "we've got nothing"), etc.

The ripple effect from mysterious hair and eye colors alone could go a long way to explaining some of the differences between our universes.