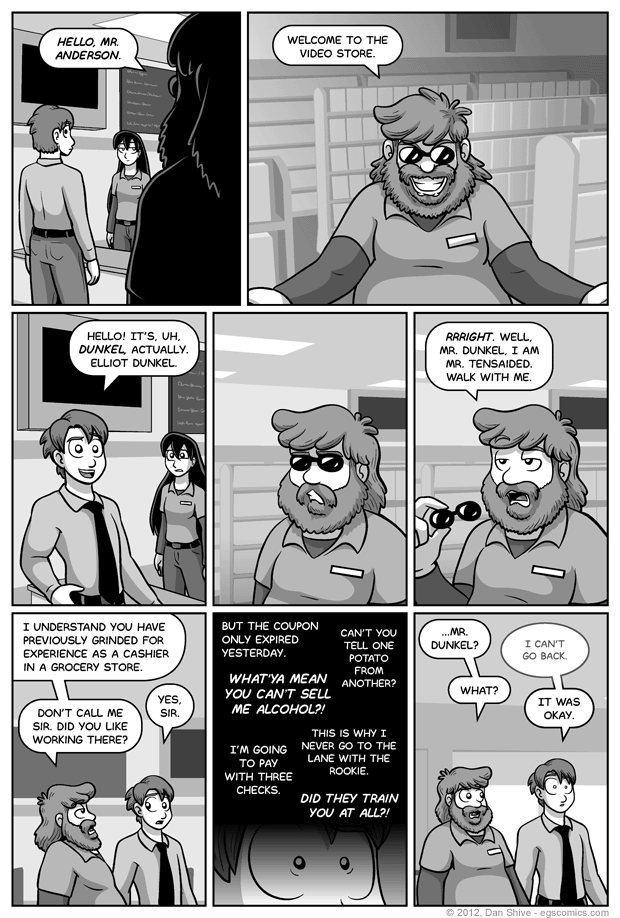 And now, a glorious look at what I wrote in the script for panel four of this comic:

Elliot has seen and even owns The Matrix (AKA the movie Tensaided is referencing), but I've learned from experience that people will often miss a reference they should get when they're flung out of context. This is because people are mean and horrible and don't realize how awesome and cool my random pop culture references are.

Of course, in Elliot's case, it might just be that he's horrible at keeping such information straight.

I could rant for a long time about my experiences as a cashier in a grocery store when I was a teenager, but I know it's far from the most difficult job in the world and I don't want to whine (much) about a job I don't even have anymore.

In answer to that last question in panel seven, however? Hardly any. They had a sort of "throw the young bird out of the nest and see if it flies" approach to training, which basically meant I had to chirp for help a lot over things that would have been simple on my own with even the slightest bit of advance explanation.

Come to think of it, when I was younger, I really wanted to work in a movie video store. Or a comic book store... Oh snap. I might be living vicariously through my characters! THIS IS SHOCKING.