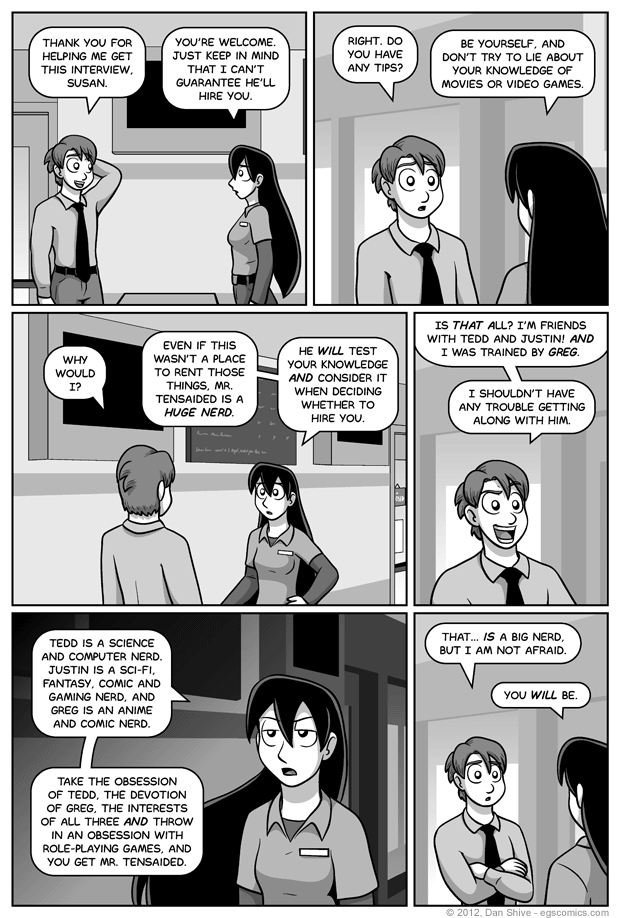 Gentlemen, this is the Mr. Tensaided. More nerd than man, more geek than jock. Known to have such determination to run role-playing games that he has, at least once, narrated reality.

Only a fool does not fear this man. Or Daredevil, but he's a man without fear and is therefore exempt from this assertion.

Hardly any of it is visible in this comic, but I did essentially design the layout of the entire store and make a digital model of it. Granted, the layout is about as simplistic as I can get away with, but making it needlessly complicated wouldn't accomplish much beyond making it, well, needlessly complicated. That "needless" part is likely a good indication of how necessary that would be.

I decided not to litter the interior of the store with movie posters. There are a couple in there, but there's going to be enough natural clutter just from the movie and game cases themselves. That, and I found there weren't a whole lot of places to put them that wouldn't be better suited for more merchandise.

There are two posters per window with content visible from outside the store (only see the white backs while inside), however, and several TVs throughout the store. Two are visible in this comic, and while they're off for now, I do plot to put whatever random things strike my fancy into them when convenient. I can claim pretty much anything being shown is either a movie or a trailer for a movie, so I hope to have some fun with them.

Were I designing the counter area for actual sales and not a comic with characters talking to each other, I would have put some candy or magazines for sale on the part of the counter between Elliot and Susan. Given that I don't want such things obstructing possible ideal angles, however, that part of the counter is just clear.

If anyone asks, Mr. Tensaided did that intentionally so any customers experiences nerd rage have a surface to hit with their fists without harming anything.