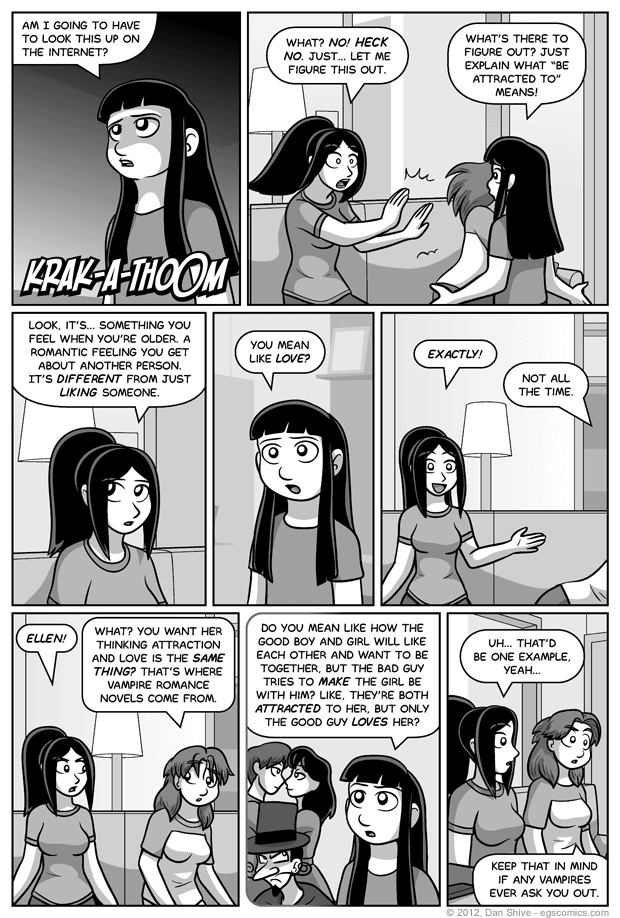 I pretty much am specifically picking on Twlight in this comic, which is somewhat unfair of me seeing as I haven't read the books or watched any of the movies. Assuming there isn't some sort of massive conspiracy perpetuated by a large quantity of otherwise unconnected individuals, however, I suspect the criticism to be accurate.

Having said that, however, I think I might actually have to rent the first movie at some point now that I've made this comic if for no other reason than my own personal karmic balance. I really don't want bad karma with Twilight in the right, but I'd best stop there before karma demand I watch the entire series.

IT'S THE INTERNET! RUN!

I have no idea how parents deal with their children having internet access. I really don't. I know there's parental block software and what-not you can use to help keep them from seeing things they're too young to understand, but you can't block everything, and that also begs the question of whether one actually should limit what they can view online.

I suspect there's some sort of middle ground in there somewhere, but I'm not going to pretend to have the answer, especially not after freely admitting I don't have it at the start of the last paragraph. It's bound to vary by child, culture and household anyway. Whatever the right answer(s) is, this is going to be one of the several billion things that will keep me up at night should I ever have children of my own.